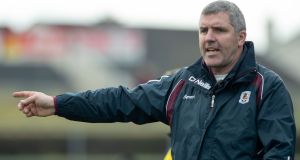 When Kevin Walsh was manager of the Galway football team, he often fell into conversation with his selectors, Brian Silke and Seán Conlon, about the nature of coaching. During the season, they met at four in the afternoon to prepare for 7pm sessions. It might be 11 at night before they left the ground. Those blocks of time working and coaching together gave the trio plenty of opportunity to think about why they were doing this; about what, beyond the core objective of winning games and striving for the mythical white whale of the All-Ireland, all of this effort was about.

These were useful questions. What were they trying to impart? What is the purpose of coaching? Those conversations eventually led to the recent creation of a new coaching platform they decided to set up.

‘Growcoach’ was originally conceived as a series of clinics the trio would offer to clubs around the county and beyond with the potential for an online presence. The national lockdown flipped the vision and in recent months they have delivered several 30-minute clinics on some aspects of the game that have obsessed Walsh both as Galway’s All-Ireland winning midfield anchor and as a coach.

Footwork, spatial awareness, how to tackle, how to get free, how to neutralise an attacker, efficiency of movement and learning how to run the correct angles to receive a pass are among the small, vital and almost unnoticed aspects of the game which he has always valued. Some of Walsh’s belief system originates in his years playing schoolboy basketball with Ireland, a grounding which he has shaped and moulded through his years in elite Gaelic football. He is still a coach and laughs at the suggestion that he is giving away his secrets.

“Yeah, well. I’m over 50 now. I just don’t want to take all of this and put it away in a cupboard. There is too much about giving away your secrets. Yeah, okay: you are doing that. But what is wrong with giving people something that is good? Maybe I will be back coaching in a few years. Fine. But it isn’t simply a matter of: there you are and you learn it. You have to go through a long process to get it right. Can we go deeper in coaching to do that? I like people to look at aspects of coaching which I feel have been neglected. Because I benefited from it as a player and as a manager.”

The web classes are successful in clearly illustrating and explaining what could easily turn into forbidding technical detail. One of the aspects they demonstrate, for instance, is how an attacker can get free from a defender, using the counter-intuitive method of initiating the contact with their marker and then using that to create space.

“Lads are turning around to me and saying: ‘I wish I knew that earlier in my career’,” says Seán Conlon.

Conlon has been putting the theory to use. He took over Galway club Barna at the start of this year and they achieved their first championship wins in five years. The hope is to improve all players on the field by 10 per cent in their deficiencies. In some cases, it means untangling many bad habits or rigid practices players have acquired over years of playing.

“A lot of the players that would present to us at club level would have deficiencies in aspects of their game. If you can improve any of those, even in a small way, it has to be an addition. Barna didn’t have a win for five years. They were very close in that time. And we implemented a lot of the things we do at Growcoach. And lucky enough, it has worked. Say a guy is a bad tackler. We can impart something that makes them 10 per cent better. And if you do that across the squad, then you might get over the line in games where you have been falling short.”

All-Ireland champions Corofin have become the perfect club model and have set the tone in Galway over seven unbeaten seasons. Their exit from this year’s championship, following a loss to Mountbellew-Moylough who have been steadily chasing them, reflects well on the standard in the county. But what has enabled Corofin to stay so strong for so long? Brian Silke played on the team that won the breakthrough All-Ireland in 1998. He believes that much of Corofin’s success is down to the coaching structures there.

“It’s fairly common knowledge that Frank Morris is an excellent coach,” he says now. “And he gets involved in different age levels still. And Aidan Morris is bringing the seniors to a higher level. But there is definitely a differentiation at club level. A lot of coaches have probably learned what they have learned through the club. And probably the best model is the club workshop. But I know 40 coaches won’t go online to learn. They just mightn’t be that much into it. So there is a lot of room for improvement. And there aren’t that many who would go home and study coaching. A lot of coaching is social.”

That stops, though, at intercounty level, where coaching has been a ferociously competitive and pressurised business for years. Walsh took charge of Galway football when the tradition was in danger of slipping towards the periphery. The county hadn’t appeared in an All-Ireland semi-final since 2001. They were promoted to Division 1 after a six season absence, qualified for a league final, beat Mayo three years running and returned to an All-Ireland semi-final.

But by Walsh’s last season, there was a loudening criticism that his teams were too defensively oriented.

“The perception might be out there that we didn’t do a lot on offence. But we did a huge amount on how to space, to screen, to break down zone defences. And that was successful. I suppose in the All-Ireland semi-final against Dublin we didn’t take the chances. We didn’t make them pay. We did create those chances, though. But it was the first time that the powers that be saw Galway as a threat in quite a few years.

“We were hearing this thing from the Kerrys and Mayos: we always love playing Galway, lovely style. But there was an edge to that Galway team and that started to get under people’s skin. You don’t mind criticism but when it is not backed by fact or balance, that can get up your goat.”

The automatic assumption is that one of the reasons for Dublin’s five-in-a-row era is that they got a jump on other teams on the very fundamentals which Walsh promoted with Galway. They were just that step ahead. But Walsh isn’t entirely convinced that it was that simple.

“To a degree. There were still massive deficiencies in a lot of the Dublin players in terms of what we are talking about. Dublin would have struggled away from home a lot of times. If they are beating Mayo by one or two points and replays and there is every chance that Croke Park was worth that one or two points to them. And had they lost those games you’d see a lot of those deficiencies in players. But I am hoping that people will not make their judgments based just on results but on the improvements they see in players.”

The trio will continue to give clinics as the GAA gears up for a unique winter championship. While there is a small fee to sign up, nobody, as Conlon says, is going to make money out of the concept. And they accept that while many coaches out there may enjoy the few hours they give to the game, not everyone will be committed enough to giving their time to online tutorials. But some will – and if that helps better practice, then their effort is worth it.

“I think a lot of coaches may be fathers or parents and they go up to the pitch with the best will and the world,” Conlon says.

“But they are not probably bringing the right coaching and information to the kids. In general, the whole game has improved. I suppose this is our vision of it. You may not be born with the innate talent but if you are coached properly and given the tools you can make the most of what you do have as a player.”