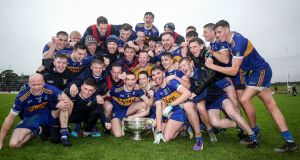 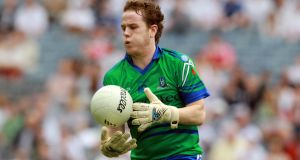 Shane Duffy in action for Monaghan in 2010. Photograph: Donall Farmer/Inpho

Shane Duffy leant against the railings in Navan’s Páirc Tailteann with his father after Sunday’s Meath SFC final success and cut a relieved figure.

A few minutes earlier, after watching a Gaeil Colmcille penalty whistle past him, leaving the underdogs three points ahead two minutes into stoppage time, the 38-year-old figured his time with Ratoath was destined to end on a low. Yet another regret for the former Monaghan and Magheracloone goalkeeper and no opportunity to atone.

“My dad was saying to me that I’ve won something now in every decade for the last four decades,” said Duffy.

There was an intermediate medal with Ratoath in 2015 too, in Duffy’s first season with the club.

Yet the father-of-two experienced more misery than magical moments throughout his career and felt Sunday was poised to be another entry into his scrapbook of regrets.

“You do go back through your career and you genuinely do kind of say, ‘Jeez, I regret this’ and ‘I regret that’,” explained Duffy. “Losing so many county finals, and losing them all by a point or two, losing semi-finals . . . like, everyone in Monaghan will tell you we were the dominant team in that period but we just didn’t [win enough], we only won one title.

“I missed out on that Monaghan breakthrough in Ulster, missed that by a couple of years. In 2007 and 2010, we got to two Ulster finals. I think particularly in 2007 we were the underdogs going into it and lost narrowly and that’s the year we lost to Kerry by a point in the All-Ireland quarter-finals too.

“They’re all the little things you say, ‘Right, could have won those’. At the very, very end there against Gaeil Colmcille, I was thinking, ‘That’s another one gone, that’s another regret’. They even took ‘Beano’ Hanlon off, their top scorer, and thought ‘That’s it, job done’. I was gathering my stuff in the back of the goals thinking, ‘That’s it, I’m going to sign off on a low’ so look, it’s nice to be on the right side of it for a change.”

Duffy and his young family lived in Dublin for a period before moving to Ratoath, just across the border in east Meath, in late 2014 when expecting their second child. Truth be told, Duffy’s GAA ambitions weren’t high at that stage having finished up with Monaghan a couple of years earlier following hip trouble. Ratoath, still operating in the intermediate ranks at that stage, had other ideas though.

“It was literally the second day in the house, a knock came on the door, it was the chairman and the manager at the time and I said, ‘Jeez, how did you know I was here? I hardly even know where I am so how did you know?’” smiled Duffy, who made 15 championship starts in a row for Monaghan between 2005 and 2008.

“I never found out that, never found out. They had their wits about them in fairness. Ah look, it was great, it was nice to get involved in the club. At that stage I was kind of expecting to wind down but I got a new lease of life.”

Ratoath’s meteoric rise from junior champions in 2012 to back-to-back senior winners now shows no signs of stopping. They’ve got ambitious plans to develop new facilities on a 10-acre site next to their Brownstown base.

Duffy says it’s badly needed as they struggle to cater for the huge demand following the housing boom that increased the local population from 600 to 11,000 in 30 years.

“I’m involved with the underage system and we had our U6s, or our ‘Ducks’ as we call them, training on Saturday and we had 68, that’s boys only,” he said. “The girls have their training as well. Then the Under-7s have their age group, they had about 47, so that’s the numbers we’re dealing with. It’s brilliant, it’s great.”