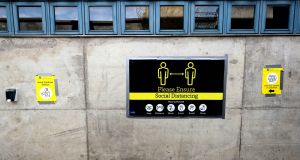 The GAA has suspended all club fixtures with immediate effect. Photograph: Ryan Byrne/Inpho

The GAA has called off all club matches until further notice. The association’s management committee made the decision on Monday, prompted by scenes that have taken place at and after various county finals around the country, most recently the aftermath of the Cork senior hurling final between Blackrock and Glen Rovers on Monday.

“The decision has been taken,” according to the statement, “in the interest of public safety following a number of incidents that have been brought to our attention in recent days. In particular, post-match celebrations and a lack of social distancing at certain events have proved disappointing and problematic.

“This directive applies to all ages and all grades across the island.”

The intercounty season is due to start in less than a fortnight and it now appears likely that all matches will take place behind closed doors, if the championship survives proposed tightening public health restrictions, as Level 5 does not permit any sports events.

Earlier on Monday, Cork GAA had “pleaded” with clubs not to breach public health guidelines when celebrating county title wins. The county was responding to social media coverage of Blackrock celebrations after the club had won its first senior hurling title in 18 years on Sunday.

It wasn’t the first issue that has arisen in relation to compliance with public health regulations within the county - or nationally - in respect of GAA-related activities.

Among the finals scheduled for resolution next weekend is the Cork senior football decider between Nemo Rangers and Castlehaven.

The issue first came to prominence in September when scenes from the Tyrone senior football final emerged on social media and showed a disregard for social distancing and other safety protocols both after the match and in later celebrations.

Further attention was drawn to the breaches by a statement from NI First Minister Arlene Foster.

Privately, Ulster Council officials were concerned about the broader impact of the incident, which an official statement accepted “not only breached GAA protocols but, and much more significantly, public health guidelines”.

The situation in Ulster has gravely deteriorated in the meantime with positive tests reaching multiples of previous daily records.

The week before last, at the remote media conference to announce finalised dates for the upcoming intercounty season, GAA director of games administration Feargal McGill was asked whether the association was concerned by the scenes.

“We are keeping an eye on it, that’s for sure” he said, “see where we get to over the next week or two.”

Substitute Foden resuces a point for City at West Ham 15:02
‘The knee felt perfect’ – Dan Leavy on cloud nine after long-awaited return 13:42
Heartbreak for Tuohy and O’Connor as Tigers down Cats 13:14
McIlroy well off pace as Thomas leads low-scoring Zozo 10:24
Seán O’Brien: Anger over my parents’ break-up never left me 09:30