Davy Fitzgerald has issues with GAA’s plans for League final 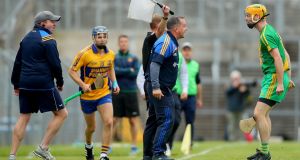 An audience with Davy Fitzgerald is never less than compelling.

The latest – at an EirGrid promotion to announce the company will be celebrating the role of GAA managers in 2020 – lasted 35 minutes and provided almost 5,000 words of quotes.

The Wexford manager and victorious Sixmilebridge coach will often use these events to make a well-rehearsed point or two before spending the rest of the Q&A carefully navigating the terrain. So it was again.

The few sidewinders he came armed with here were all directed towards the GAA. Firstly, he is fuming that the National League won’t be properly concluded, the meeting of Clare and Limerick in the Munster SHC quarter-final instead doubling up as the league decider, as both teams topped their groups.

“I 100 per cent believe that it’s not the right way to do it, what they’ve done,”said Fitzgerald. “I just think it was premature to do what they did and I don’t think it’s the right call. That’s my honest opinion. I don’t think you can just pick two teams and throw them into a League final. One hundred per cent I’d like them to revisit it. Instead of maybe playing a Walsh Cup or playing something next year before the League, take two or three weeks and play this year’s competition off. I think it’s important to finish it out.”

Fitzgerald was more diplomatic when pleading with the GAA not to put Wexford’s October 31st Leinster semi-final blockbuster with Galway under lights. It’s currently scheduled for a 6.15pm Saturday evening throw-in, though a venue hasn’t been chosen.

“My preferred choice? To play it in daylight,” said Fitzgerald. “I think it’s a better game played in that. Hopefully Croke Park will see the sense in letting us play there. I think it’s the right place to play. The lights are phenomenal there. If we have to use them, I think the stadium would be great. Hopefully that’s where we will be playing.”

After coaching his native Sixmilebridge to back-to-back Clare titles at the weekend, Fitzgerald also urged the GAA to revisit the decision not to hold provincial or All-Ireland club competitions this year.

“I definitely think it’s worth revisiting,” he said. “If they get the space in January and February, to run the Munster club would probably take three weekends. If they can do it, I do think every club would appreciate the chance. It’s a long-standing tradition.”

I’m a lot more conscious about sanitising and stuff like that, about not hugging guys and touching off guys

Then came the jousting with Clare’s 2013 All-Ireland winning manager. Are there any injuries in the Wexford camp right now?

“We have a lot of injuries at the moment, yeah,” he replied. Would he care to elaborate and name names? “Not really.”

There was also plenty of middle-of-the-road, harmless chatter as Fitzgerald cheerily shot the breeze. Like how will winter hurling affect a team’s tactics?

“Will Wexford set up differently and do things differently?” he mused. “I don’t know, I think you have to play to the style that suits your players, be it winter or summer.”

And how is it that Sixmilebridge retained the Clare championship, placing their official seal upon the competition with five wins in the last eight seasons, despite not scoring a single goal along the way?

“We only conceded two all championship, I think we only conceded one last year, so in 10 games we’ve conceded three goals,” smiled Fitzgerald. “I think Galway won an All-Ireland not scoring many goals. Do they care? Look, whatever it takes to get over the line.”

Fitzgerald broke into another grin when discussing the issue of water breaks in games. He’d been against them at first.

“I’ll tell you the truth, when it started, I wouldn’t have been a fan of them at all,” he said. “But even take the weekend, it just happened that I got one minute to have a few words with the guys about what we needed to do and then we got back at it. It actually helped unreel.”

Perhaps the most substantive part of the interview was Fitzgerald’s thoughts on life alongside Covid-19 and the perma-threat of infection.

“I’m a lot more conscious about sanitising and stuff like that, about not hugging guys and touching off guys,” he said. “I’ve five stents in so I’m a bit more wary. But I am one of these guys who want to get on with things. I just need to be as sensible as I possibly can.”

Was there ever a moment where he considered removing himself from group activity with Wexford?

“There are risks, I am prepared to take them,” he said. “I want to be as careful as I can in the meantime but I don’t want to stop my life.”

EirGrid, official timing partner to the GAA, will celebrate one of the most pivotal roles in Gaelic games, the manager, through its ongoing Manager of the Month awards.