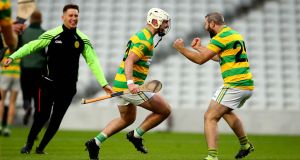 They needed injury-time points in regulation time from a Tadhg Deasy sideline and an Alan Connolly free either side of a Patrick Horgan free for Glen Rovers to force extra-time, 1-20 to 3-14.

But there was no disputing the better side in the additional 20 minutes as the Rockies made full use of the howling wind in the first period to surge eight points clear.

They were boosted by goals from Shane O’Keeffe and Robbie Cotter, part of their 2-4 without reply, to turn around 3-24 to 3-16 in front.

The Glen hit back again with a Horgan penalty in the opening minute of the second period of extra-time and they added two more points to leave a goal between the rivals, 3-24 to 4-18.

But, time ran out on them and the Rockies sealed their first title since 2002 with Cotter’s second and their fourth goal near the end.

In the first-half of normal time the Glen were quicker to settle, claiming the opening three scores into the near-gale with Liam Coughlan taking only 20 seconds to fire the first point.

The Rockies, though, found their rhythm after Niall Cashman’s super score from distance and he repeated the trick to complete a set of six unanswered points before Horgan left it 0-6 to 0-4 at the first water break.

Dean Brosnan made it a one-point game on the resumption, but the Rockies added another half-dozen scores to lead by 0-12 to 0-7 at the interval.

Yet, within four minutes of the restart, the Glen reclaimed the lead with a couple of quick-fire goals from Simon Kennefick, grandson of the great Christy Ring who was born 100 years ago this month.

But that advantage didn’t last long either because substitute Deasy goaled with his first touch after 40 minutes before Mark Dooley pounced for a third Glen goal, 3-9 to 1-15 at the second water break.

It was helter skelter from there to the finish, but the Rockies were stronger in extra-time.