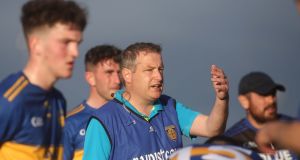 Kilcar manager John McNulty has appealed to the GAA to allow the last few club championship finals to be played this weekend, including his side’s Donegal SFC Final against Naomh Chonaill. Photograph: Lorcan Doherty/Inpho

The manager of Donegal county finalists Kilcar has appealed to the GAA to grant a dispensation to allow their game against Naomh Chonaill to go ahead this weekend, along with all outstanding deciders countrywide. Six county finals in football and hurling are among the fixtures affected by the nationwide stoppage of games announced by the GAA, a move John McNulty sees as unfair to the players involved.

“It’s a serious blow,” McNulty says. “I just think it’s not fair. We know there’s going to be a shutdown of some kind coming from the Government but there’s whatever amount of days to go before that happens. Surely to God they could have allowed us to play that final.

“I find it hard to accept their reasoning. Why not let the rest of the finals play out? There can only be four or five altogether in the whole country. Could they not make the exception and just allow them to be played? I know we have the pandemic, everyone understands that we have to do the right thing. I totally understand that and I welcome it.

“We have been abiding by all the rules and regulations all year, doing everything properly at training and surrounding it. All just to get to play our county final. I’m just so gutted for the players and for everyone in the club.”

The GAA move comes in the wake of local GAA celebrations around the country going ahead without the appropriate safety measures being apparent. With county finals down for decision this weekend in football (Donegal, Waterford, Cork) and hurling (Offaly, Kildare, Laois), McNulty argues that with everyone having fair warning at this stage, clubs could be allowed to finish out their season on the strict proviso that the aftermath would be within regulations. That said, he doesn’t hold out much hope.

“We have no idea, it’ll be up to the GAA and the Government. Intercounty is still on and they’re allowed to train away. So God knows when they’ll get around to letting us play our final. It’s surely an easy enough thing to give a dispensation to finish off competitions that are just about to end. I think every county would move mountains to get that done. Could they not just allow this weekend to go ahead and make it clear that the plug was being pulled after that?

“We’d even be happy enough not to wait till the weekend. Play the final Wednesday night, Thursday night, Friday night, whatever. We’d make that work. I think it’s a very, very sudden thing to go from us training yesterday morning to now suddenly find that the game is off because of something that was done in some other club in another county.”

The Donegal county final was already being played a fortnight later than planned after Kilcar had to stand down on foot of positive Covid tests in the county squad. While Declan Bonner’s panel are back training, the nixing of the county final for a second time appears unjust in McNulty’s eyes. Especially since all indications are that the intercounty season will go ahead as planned.

“The fact that the intercounty game is being allowed to go ahead stands out for me. The fact that they’re allowing Donegal to go and play Tyrone or go down to Kerry in the league but we can’t go and play a county final. That’s every bit as much of a risk as us playing our game, I would have thought.

“I’m just gutted for ourselves. I just feel that look, we’re heading into lockdown. We know that and we accept that. But even if we had the chance to get this game played midweek, we’d take it. Just get the season finished. Maybe, hopefully, the county board will be able to make a case to Croke Park to get a dispensation to finish off the county championship this weekend.”