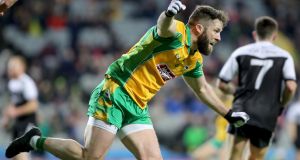 In the end, Corofin did in seven minutes of extra-time what they had spent 10 times that failing to do before it. They penned Kilcoo into their own half, blitzed their kick-out, pressed them until the pips squeaked and made the scoreboard whizz. The perennial Galway champions gobbled up their third All-Ireland on the trot as if no other outcome would made a lick of sense.

By rattling off 1-4 without reply in the first half of extra-time, they took a sledgehammer to a game that had been stubbornly immune to all previous attempts at being cracked open. In Kilcoo, they found nutty opposition determined to make them grind for their glory. “In the other finals we were probably let play football,” said Corofin manager Kevin O’Brien afterwards. Kilcoo had no intention of facilitating them in that respect here.

And so we had a game that didn’t see a score from play until the 24th minute. One in which the half-time score in normal time was 0-3 to 0-2 in favour of the Down champions. One in which the best club team of this and most eras went 22 minutes at the end of normal time without scoring even though they had an extra man.

Indeed, if that scoring burst in extra-time proved anything, it was that they had made desperately heavy weather of the day up to that point. Corofin weren’t just numerically superior after Dylan Ward’s second yellow card in the 34th minute, they were quite obviously the better side. Yet despite going 0-7 to 0-4 ahead with 48 minutes on the clock, they seemed tighten up coming around the final bend.

In a game that got scrappy and cranky the closer the final whistle came, it was Kilcoo who were playing with freedom and gusto in search of a result. Conor Laverty and Darryl Branagan chipped points to bring the lead down to two heading into stoppage time and from there to the long whistle, it was the Down side who had all the chances. With the game on the line, they kicked three wides and saw another opportunity blocked by the headlong dive of Gary Sice.

All the while, Corofin were playing against type and grimly holding on by the most cynical means possible. The man who has a name for being an early riser can lie in bed all day. So it is with Corofin, a team famed for their total football and yet, as they showed here, perfectly equipped when it comes to the darker arts. By the end of the normal time, the free count was 23-11 against them - however hard their supporters booed Conor Lane, that’s too big a split to blame on a referee.

Between one thing and another, it caught up with them at the end of normal time. Any time-wasting they did backfired as Lane extended the declared five minutes of stoppage time to 10. One last flailing drag down gave Kilcoo a free outside the 45 and some obvious standing in front of the ball to stop a quick free being taken got it moved to kickable range. Though Corofin had been the better team, it was hard not to feel that Paul Devlin’s equalising free was pretty much what they deserved.

That said, a subsequent scuffle in the tunnel, initiated by the Kilcoo players as they ran off to prepare for extra-time, was pretty brainless from the Down side. Corofin attacked the restart with the settled fury of a team who’d had their heads straightened out by the incident.

Man of the match Ronan Steede landed his third point from play to push them into an 0-8 to 0-7 lead and from there, they ran away with the game. Substitute Dylan Canney nailed one to double the margin a minute later and all of a sudden, Kilcoo could get no purchase in the game.

Steede and Daithí Burke were breaking everything around the middle now and soon enough they were recognisably Corofin again. They came flying from all angles and directions, overlapping and shape-shifting at will. Liam Silke popped up from corner back for a score, Sice iced a free. Kilcoo were dying for the whistle that would signal half-time in extra-time and a chance to regroup.

It didn’t come. Or not soon enough, at any rate. Micheál Lundy tried to whip one last score before the break but it met the left-hand post and dropped down. Conor Cunningham was quickest onto the break and his sidefoot slipped past Kilcoo goalkeeper Martin McCourt into the net.

And that was that.