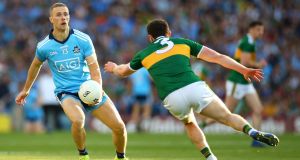 Paul Mannion: “Everyone’s talking about it; why should it be just five? Because it hadn’t been done before? What if it was six? We’d all be going with the same hunger and fervour.” Photograph: James Crombie/Inpho

You don’t expect to come away from these gigs with a new recipe. But then you don’t generally come across players as interesting as Paul Mannion every day.

Having told The Irish Times last year about his change to a meat-free diet, he spent a hefty chunk of the Eir Sport launch on Wednesday being asked about exactly how that works for an elite athlete. And, most crucially, how it works for his poor, put-upon Ma on Christmas Day.

“I had a lovely kind of shephard-less pie that my mother went to an awful amount of trouble to make,” he replied.

“Instead of meat ... it’s very similar to mince actually, it looks like it – there’s loads of brands making meat replicas, for lack of a better word. It’s soya based, some of it; seitan, which is like a wheat protein, then mixed with lentils and beans and put a nice little sheet of mash potatoes on top of it. You wouldn’t know the difference, honestly.”

Initially, the switch meant an extra workload for the Dubs’ team nutritionist Daniel Davey as they worked out how Mannion would be able to keep up his protein requirements and suchlike. But after a while, once Mannion got his shopping list in order, it became second nature. He’s been vegan for a year and can’t ever imagine going back. Along the way, he has piqued the interest of some of his Dublin team-mates too.

“I’ve met loads of people who have said they’ve cut out red meat. My dad, a few of my friends, a few lads on the team now as well are trying more and more vegan food. I’m noticing the vegan portions at dinner after training are dwindling! So, it’s nice as well to, I suppose, share my experience and to know that that’s informing other people as well.”

Mannion was as surprised as the rest of the country when Jim Gavin left the Dublin job in the run-up to Christmas. The world keeps turning, though. Dessie Farrell had him at under-21 level back in the day and Mannion sees no particular reason why they shouldn’t keep building on the five-in-a-row.

He [Gavin] was a fantastic manager in every sense but, look, as he said himself, sometimes teams need new faces, a new breath of fresh air to kick some life into the team. Particularly this year is a unique challenge for us and [we] might be better served with a different man at the helm.

“We’ve kind of got to reinvent ourselves in many ways, ask ourselves tough questions. Can we kick on from here and push forward? And certainly a new management team is well-placed to help us do that.

“There are so many different sides to it. I think the one we’re going to focus on is how are we going to make sure we’re a team that doesn’t fade away after this achievement. What would that say about us if we did? Everyone’s talking about it; why should it be just five? Because it hadn’t been done before? What if it was six? We’d all be going with the same hunger and fervour.

“We’ve had a few months off to celebrate and reflect on that achievement and now we’re focusing on where can we actually go from here. And just trying to move that ceiling, I guess, and just focus on one game at a time and trying to get better as individuals and as a team and see where that takes us. When we’re all retired we can all look back on it.

“It really wasn’t so much: ‘Here we go for five and we’ll all ride off into the sunset’. It was nothing like that at all. Stephen Cluxton is a great example of that. He won Footballer of the Year, five All-Irelands in a row, captain through it all, and people might have thought that it was a good time for him to step away, but I’ve never seen him more hungry and looking forward to a new season.

“I think that’s really set the tone and everyone is dying to get back in and see how far we can actually can go and not stop at five.”