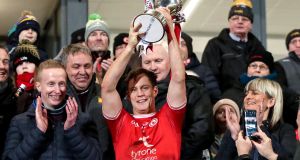 Tyrone’s dominance of the Dr McKenna Cup continued at the Athletic Grounds as they lifted their eighth title in nine seasons, getting the better of Monaghan in a dogged decider.

It was a contest that failed to ignite, despite the efforts of both teams to find intensity and momentum ahead of next weekend’s NFL launch.

Mickey Harte is looking for players to fill the boots of Mattie Donnelly and Cathal McShane, and in Frank Burns and Darren McCurry he may have found the answer.

Both men looked hungry and incisive, with Burns working well as a target man and substitute McCurry finishing and creating with impressive accuracy.

Burns and centre back Michael O’Neill picked off early Tyrone points, but a series of Monaghan turnovers, with Boyle and Shane Carey doing some excellent work, helped Monaghan get some attacking rhythm going.

But they came up against a packed Tyrone defence, and struggled to find the openings they needed, until Shane Carey got them off the mark in the ninth minute.

The loss of key defender Colin Walshe to an injury early on is a worry for Farney boss Seamus McEnaney, with a difficult NFL Division One opener away to Galway coming up this weekend.

But they got themselves on level terms in the 25th minute with a couple of well taken Conor McCarthy efforts.

The introduction of Darren McCurry on 24 minutes added a cutting edge to the Tyrone attack, and he set up a score for Kierarn McGeary and picked off three fine points himself as the holders eased clear late in the half.

They went in at the break with a 0-8 to 0-3 lead, and a scrappy second period lacking in intenstithy and direction produced just six scores.

Monaghan’s first in 26 minutes came from a Shane Carey free, but there was fresh hope for the Farney men when McCarthy landed his third of the evening.

But their challenge failed to find traction, and they missed a host of scoring chances as Tyrone dug in at the back and snuffed out the threat.

Monaghan had failed to register a score in the final quarter until midfielder McBennett rolled the ball to the net in stoppage time after Dessie Ward’s effort came back off a post.