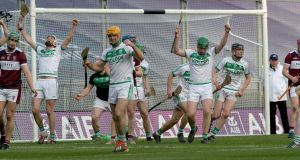 On a memorable weekend for Kilkenny hurling, Ballyhale Shamrocks made history by becoming the first club to win the All-Ireland title on eight occasions. It meant that after the weekend, the county ended up with a clean sweep of junior, intermediate and senior club All-Irelands.

The contest, which had looked to be drifting irretrievably in the winners’ direction – they led by five in the 54th minute – ended up a close-run thing, as Tipperary champions Borris-Ileigh, driven forward by their campaign’s rain maker Brendan Maher, threw everything at it to narrow the gap to just a score but they couldn’t close the deficit.

Both clubs had been hit by untimely bereavement in the past year or so and victorious manager Henry Shefflin emphasised that afterwards.

“I think as joyous as an occasion as it is today it’s a very sad day as well. There’s no doubt about it, to do back to back you have to have serious desire and want.

“I think Eugene Aylward’s (one of two players, with Eoin Doyle who died in the past 18 months) passing last year has given them that want and desire.”

It was the Shamrock’s first back-to-back championship achievement and although they looked below-par for phases, their reliable strengths of TJ Reid’s sharp shooting and the composure that comes with being champions saw them through.

Shefflin’s team came in as favourites but Borris had been confounding odds all season.

The contest followed a strange trajectory. The underdogs started well and in the opening shots of a personal tour de force – 0-7, including a glorious sideline cut – their centre forward Jerry Kelly scored three terrific points in the first 10 minutes to open up a 0-3 to 0-1 lead.

They were without doubt having the better of the possession and territory but the Tipp champions were undone by faulty marksmanship. Eight wides were no more than their opponents hit but the seven shots that dropped short over represented just too much wastage.

Indiscipline at the back helped to undo the good start and TJ Reid’s accuracy from both play and placed ball kept the scoreboard even and as the half wore on, some excellent shooting by Patrick Mullen as well as sharply taken scores by Eoin Reid and Colin Fennelly meant that the champions were four ahead at the break, 0-10 to 0-6.

Fennelly had carved out a first-half goal chance for himself but James McCormack made a fine save.

Having been discomfited by Slaughtneil’s use of a sweeper in the semi-final, Ballyhale prepared for it on this occasion and were ready when Dan McCormack dropped back.

“Two weeks ago,” said Shefflin, “we faced a similar scenario and probably didn’t handle it very well in the first half. I don’t think Colin (Fennelly) was too happy up in Slaughtneil because Ger Bradley was getting too much ball.

“I think we learned from that. Even in training last Thursday night and last Sunday, we trained for that.”

According to TJ Reid, they imported the services of a former – and unidentified –Kilkenny hurler to play the role in training and they looked very much in control with Darren Mullen dealing comfortably with the demands of being the spare defender.

Reid was named as man of the match by broadcaster TG4 and even the opposing centre forward had done much to merit the accolade, the official award was valid in that when Ballyhale were looking at their most vulnerable, as Kelly – selling a dummy and driving over – cut the margin to two, it was Reid who responded immediately with two well-taken points, one from a free.

“Yeah,” said Shefflin, “when we really needed him, in the last five or six minutes, you were just waiting for TJ. That’s what I’m saying – we give out the jerseys at the start of the match, number six, number three, number 11 (Reid actually wore 12 although playing centre forward), and number 14 first because we say ‘these are our leaders, lads’.”

The match was swinging very much in the Shamrock’s direction for much of the second half but it was a reflection of Borris’s difficulties.

They missed a succession of chances and although Brendan Maher relocated to the forwards and pushed hard with six points, two from play, the use of long ball into the attack hardly paid out at all. Meanwhile in the spaces that appeared Evan Shefflin raided from wing back for two points.

There was a final chance with three points in it for Brendan Maher to make something of a last-play free after he had been fouled by Shefflin but the ball ricocheted away from danger and the day was done.

“At the end of the day it wasn’t so much the wide count or the free count,” said Borris manager Johnny Kelly. “It was those efforts that dropped short or maybe taken from long distance, on the flip-side Ballyhale were so efficient, probably had a few wides but really were very clinical on the ball and finished well. It’s an area that did cost us.”