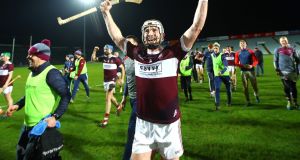 O’Byrne Cup SF final: Offaly v Longford, O’Connor Park, 2.45
A promising opportunity ahead of a crunch campaign in Division Three for both counties. Longford have the bounce of beating a fledgling Dublin in Dessie Farrell’s first competitive match in charge but despite John Maughan not being overwhelmed by his team’s form, Offaly have been steady.

Much to look forward to in the first of this year’s relocated finals: neither side looked in the best of shape during their county championships with even All-Ireland holders Ballyhale struggling and most eyes in Tipp elsewhere. But both coincidentally were fired by bereavements in the parish to the point where they make up the first Kilkenny-Tipperary club final.

On paper, Shamrocks look more obvious but Borris represent that traditional phenomenon of the team coming from nowhere and steadily building up momentum. They’re not as starry a collective but Brendan Maher is doing his best Atlas impression and they have responded to every adversity with vigour. They have a decent shot at this with a manager, Johnny Kelly, who previously guided Portumna to the title but are up against the champions, with their experience of Croke Park and who in the semi-final were harassed all the way by a substantial Slaughtneil challenge.

Uncomfortable as that may have been at the time, it was good conditioning for this. Their default strengths of TJ Reid’s free-taking and Colin Fennelly’s goal threat are functioning well, plus they have a younger cohort, who have been here before.

The Galway side are poised to make history with a third title on the spin whereas the challengers have laboured long until this season even to get out of Ulster. Mickey Moran brings a second club to play Corofin in the final after the disappointment with Slaughtneil five years ago.

Kilcoo did really well to buck the odds in both the Ulster final and the semi-final when they eliminated 2016 champions Ballyboden. Their fitness and mobility have underpinned a step-change since earlier rounds when they were struggling in the county or against Derrygonnelly in Ulster.

Incessant work-rate and a flair for well-timed goals have seen the Down club defy expectations and as knowledgeable a club analyst as Oisín McConville tips the cohesion of the Johnstons and Branagans and the intelligent prompting of Conor Laverty to spring another surprise.

Yet Corofin have never been uncomfortable against the possession game. Furthermore, they have given some exceptional displays in Croke Park on final day.

The ability to turn defence into attack with Liam Silke and Kieran Molloy and the quality kick-passing into accomplished forwards like the Farraghers, Ian Burke and Micheál Lundy, who revel in the venue’s space, have broken opponents and chances are will do so again.