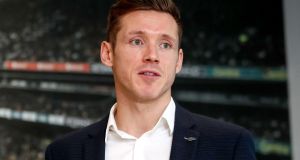 Paul Flynn, GPA chief executive: “Looking and learning from the AFL, in 2015, they rolled out a competitive balance policy within their games. . . . it had an equalisation strategy that was focused on all the teams having a chance to win their different competitions.” Photograph: Bryan Keane/Inpho

With the inequality of revenue intrinsic to the county system, there has been some discussion of the AFL’s equalisation policies as a possible guide to how the GAA might rebalance funding to the counties.

One of those strategies is financial equalisation. In March, the governing body for Australian Rules football will release its figures for the coming season.

Patrick Keane, of the AFL head office, outlined the thinking behind the measure.

“It’s been a very slow process for us. It’s taken 10 to 12 years of regular discussing with our club presidents to get to a point where it was understood and accepted that we would pay differing amounts to different clubs based on their ability to access best commercial results, their membership sizes and historical inequities.

“So in our annual report which comes out in a week or two, we have one club on Aus$27.7 million from the AFL at the top end with the bottom figure of Aus$12.6 million.”

The effectiveness of equalisation measures, which also include the long-established draft system of recruitment, has been questioned but Keane is satisfied that the financial rebalancing has been working.

“Clubs are given an idea of what their allocation will be and then we publish it for the wider football community so that it’s transparent. Some of the fans disagree with it but we believe it works for the competition, which is why we do it.

“Initially, opposition was along the lines of, ‘why would my club be giving up some of its money to the weakest club – shouldn’t they stand on their own two feet?’ Our response is that there’s not much point in having a competition if only five clubs can win it.”

Whereas the draft system, which operates on a simple reverse order with the top-placed club getting the number 18 pick and vice versa, is not applicable to Gaelic games with its strict rules on playing eligibility there may be some scope for the concept of equalisation to operate within the association.

Last year the Gaelic Players Association (GPA) referenced the policy as of potential use in a speech by chief executive Paul Flynn.

“Looking and learning from the AFL, in 2015, they rolled out a competitive balance policy within their games. It was under very different headings than what would probably be relatable for the GAA. But it had an equalisation strategy that was focused on all the teams having a chance to win their different competitions.”

That, according to Keane, is the metric by which the AFL judge the effectiveness of their redistributive policies to have been vindicated.

“We believe it has in the past couple of years. Last season we had the largest number of matches decided by a four-goal or less margin in 31 years. So we feel that on an on-field, competitive basis that’s good. In terms of the rotation of premiership sides over the last 10 years, we’ve been really pleased because we went through a phase when the top six on the ladder matched the top six in football spend.

“Since,we’ve had small clubs both win premierships and reach grand finals. In 2016 the Western Bulldogs, one of the smallest spending clubs in the competition, won their first premiership since 1954 as distinct from West Coast, one of the most powerful clubs, who won a premiership two years ago.

“Richmond is a club which has for long had really strong support but were not successful. They have got themselves organised in the past couple of years and have won two of the last three premierships but before that they had struggled for a long period before getting back on track.

The problem for the GAA is that its development grants are designed to promote and encourage the games in different counties, as a result of which those with bigger populations – especially Dublin – will always get greater amounts.

In recent years there has been some reduction in Dublin’s grants under this heading, which although slightly increased in last year accounts to €1,337,630, has reduced from the high point of €1,588,001 in 2012.

1 Gerry Thornley: Ireland don’t want to box themselves into a corner
2 Former France and Stade Francais winger Dominici has died aged 48
3 No further players to be called up to Ireland squad to face Georgia
4 Owen Doyle: Ireland suffered from officiating of the breakdown
5 Kevin McStay: Maybe a knockout All-Ireland Championship is the long-term solution?
Real news has value SUBSCRIBE