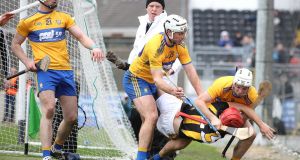 Clare’s Jack Browne and Bill Sheehan of Kilkenny scuffle off the ball during their Allianz League clash. Photo: Bryan Keane/Inpho

This was one of those games where neither side will be entirely sure how they managed to not win nor overly clear on how they didn’t lose. Clare needed to rattle off a desperation 1-3 in the closing five minutes to save a game they’d dominated for good chunks of the afternoon. Kilkenny were wan and tepid for a lot of it but were nonetheless coasting to victory as time ran down. Both could have won it in injury-time, both seemed to have left it behind them. A rum old day all round.

These games live in a strange sort of half-light. The result isn’t going to ruin anyone’s day, the buzz of a good performance won’t last the length of the shower. The draw here leaves Clare top of Division 1B, guaranteed a game at least in the knockout stages. Kilkenny will join them with a win over Laois next week. Had it turned out the other way around, would anyone have given more than a shrug?

Since there’s no real jeopardy, a game like this ends up having to be propelled by its own momentum. Clare took a three-point cushion into half-time but had the look of half-interested bystanders for much of the second half, as Kilkenny inched their way to a 1-17 to 2-10 lead on the hour mark. Brian Lohan’s side had a sum total of three Tony Kelly points to show for their second half – and two of those were frees. If ever a game was primed to peter out, this was it.

But hurling can’t help itself sometimes. Out of nowhere, a seven-minute stretch of rattling good stuff broke out. Kelly swished a free, Diarmuid Ryan followed up with a fetching over-the-shoulder number and Clare were suddenly like a kid who snaps awake in the middle of class and starts shouting out the right answers.

A long ball into the Kilkenny goalmouth was dropped by Darren Brennan and Shane O’Donnell managed to squirt a finish through the copse of sticks and ankles. Clare were ahead, having scored more in 90 seconds than they’d managed for the previous half hour. Walter Walsh promptly grabbed the resultant puck-out from the sky to draw Kilkenny level at the end and send the decibels far beyond what you’d have thought the 5,716 crowd to be capable of.

There was no time to wonder where all this hoo-ha and hubbub had been earlier in the day because now there was game happening all over the place. The Clare side that had 17 wides across the afternoon was suddenly pinging them over the black spot from everywhere. Aron Shanagher sent in a screamer from the right sideline falling backwards to put Clare ahead in the 71st minute. Alan Murphy had to step up and strike his seventh free of the day to level matters soon after and still there was time for both sides to butcher chances to win.

“They were always going to come back with a bang at some stage and they got the goal near the end,” said Brian Cody. “[We] powered into it in the second half alright, probably a fair few mistakes and missed chances on both sides. At the end of the day, neither team can quibble with the result.”

Which is fair enough, in the end. it probably didn’t look that way for much of the first half though as Clare dominated possession. Their defence was sturdy and any time they managed to get O’Donnell on the ball in the full-forward line, they looked dangerous. He scored the opening goal of the game with a bounced finish on eight minutes and later put Ryan Taylor away for the second with a neat lay-off.

“The thing about Shane,” marvelled Lohan afterwards, “I was never involved with him at underage. I never realised how good he was until I saw him up close. He is a good player, a really good player. And he showed it there.”

O’Donnell finished the first half with a towering point of his own to send Clare in 2-7 to 0-10 ahead. But Kilkenny had far more spring in their step after the restart and when Ger Aylward buried a goal past Donal Tuohy on 49 minutes and followed it up soon after with a fine effort from the left sideline, they were three up and looked ready to kick on. For the second week in a row though, they stalled with the line in sight.

Doesn’t much matter at this time of the year, of course. Not a great habit to be forming, all the same.

1 Sky Sports customers set to save on bills until Premier League returns
2 Gerry Thornley: Changes to tackle laws could transform rugby by time of next World Cup
3 ‘This is sick’ - seventh-tier Swedish club cancels friendly after betting mayhem
4 Jack Grealish needs to show that his remorse is real this time
5 My favourite sporting moment: Phil Mickelson’s miracle shot at the 2010 Masters
Real news has value SUBSCRIBE