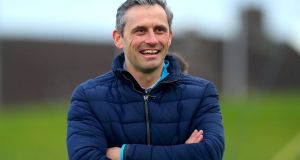 Alan Brogan: “From what I’ve seen he [Bugler] looks the real deal. I fully expect him to go on and have a great Dublin career.” Photograph: Oisin Keniry/Inpho

Depending on who you listen to, Dessie Farrell is targeting the Allianz League campaign to establish a preferred midfield pairing, to uncover a new defender or two and, ultimately, to keep a winning team, well, winning.

Discovering fresh forward talent would appear to be well down the new manager’s to-do list given the options already available though the 2020 league may ultimately go down as the campaign when Seán Bugler broke through.

Man of the match on his full championship debut last summer against Tyrone in the Super 8s, and more recently a Sigerson Cup winner with DCU, Bugler helped turn a lost cause into a dramatic draw with Monaghan in Round 3 last Saturday week.

He was only introduced in the 41st minute of that game but scored 0-3 and provided the assist for Kevin McManamon’s crucial goal during an incredible comeback. For Alan Brogan, a club-mate at St Oliver Plunketts Eoghan Ruadh, the only surprise is we haven’t seen more of Bugler sooner.

“I thought he would have seen more game time last year to be honest with you,” said former Dublin captain Brogan.

“From what I’ve seen he looks the real deal. I fully expect him to go on and have a great Dublin career. Look, it has to be earned as well. You have to perform when you get the opportunities and it was good to see him perform in the half he got last week. We’ll probably see a bit more of him over the next few league games.”

The problem for Bugler, and the reason we haven’t seen as much of him in blue as Brogan expected, is that he isn’t a defender or a midfielder and is trying to dislodge some genuine greats of the game in attack.

“Yeah, it’s a difficult forward line to get into,” shrugged Brogan, who starred in that line himself and is the subject of a March 19th episode of TG4’s successful Laochra Gael series.

“I’ve seen him from a very young age, from five- or six-years-old down in Plunketts. I remember having him at summer camps at a very young age. He lives and breathes football.

“His dad, Pat, was chairman of Plunketts when he unfortunately passed away a number of years ago. So they’ve had a rough couple of years in that regard, Seán and his family. I think for his mam, Aideen, it’s great to see him finally out there. He has all the talent in the world and hopefully he can deliver on it.”

“I think he probably just wants to find one or two players,” said Brogan, referencing the defence.

“With all due respect to Philly [McMahon] and Rory [O’Carroll], while they will still do a job for you and are well worth a place, they are probably heading towards the latter end of their careers.

“Dessie is in there for three years, he will want to bring someone through in the full-back line, maybe Sean up front and maybe someone in midfield too. Michael Darragh Macauley did well last year but he is 33 now. So you will be looking for a permanent partner to play alongside Brian Fenton.

“I know James McCarthy has filled that role but, to me, his best position is right half back, that is where I like to see him. Maybe as he moves towards the end of his career, he can move into midfield where he might not have to get up and down the field like you do as a half-back.”

1 Gerry Thornley: Home and away Six Nations could be its ruination
2 Rory McIlroy believes Ryder Cup will be postponed
3 Eddie Dunbar stays in saddle as he eyes return to grand stage
4 How Mary Pierce stepped into the light and played for herself
5 Borussia Dortmund bidding to halt Bayern behemoth behind closed doors
Real news has value SUBSCRIBE