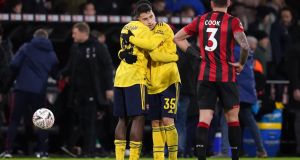 The clock is ticking. This afternoon Andy Farrell will name his first Ireland lineup as head coach when he picks the 15 players to start in the Six Nations against Scotland this Saturday. Farrell will announce his team from the Irish training base in Portgual where our own Gerry Thornley is present and waiting. The team announcement is expected around 2pm and we will have full reaction and analysis but, in the meantime, you can read our rugby correspondent’s predicted team in which he reckons Caelan Doris will be one of the new faces. Meanwhile, with Matheiu Raynal set to take charge of Ireland’s opener against Scotland this weekend, Gavin Cummiskey has a look at the men in black who will take charge of Ireland’s five matches.

Moving on, and with the schools’ rugby season now well underway, Gerry Thornley looks at one of the more remarkable stories so far this year – that of non-fee paying school Temple Carrig who have come past St Andrew’s and Pres Bray to set up a clash with defending champions St Michael’s on Thursday. The school was only established in 2014 and this is their first Leaving Cert cycle. “For them to be facing St Michael’s is akin to Uruguay playing the All Blacks in the World Cup, or Brentford somehow qualifying for the Champions League and being drawn against Real Madrid, in terms of pedigree, budget, facilities and player pool,” he writes. We’ve got loads of rugby coverage for you this morning and it doesn’t stop there as former IRFU referee director Owen Doyle writes in his column this morning that the breakdown in law and order in rugby must stop. “The law book does not seem to be read, or understood, as completely as before. The referees’ knowledge of the laws seems less than comprehensive,” he writes.

1 Orange weather alert issued as Storm Jorge set to batter Ireland
2 Coronavirus: Woman tests positive for a second time in Japan
3 How well paid do you think you are? Here’s how to work it out
4 Dublin's long-awaited Liffey cycle route to be in place by August
5 Sourcing equipment to protect against coronavirus a major challenge - HSE
6 Patrick Freyne on Love Is Blind: It’s Gilead, Love Island and Blind Date rolled into one
7 Life as a Facebook moderator: ‘People are awful. This is what my job has taught me’
8 Mother guilty of ‘ruse’ with daughter to hide Patricia O’Connor’s murder
9 Why Cork GAA is wrong to wrap €70 jersey around War of Independence
10 Free for all: Irish tourist attractions to waive fees for first national Tourism Day
11 Coronavirus: What we know so far about how Ireland is affected
12 ‘I woke up the next day in a guy’s house covered in bruises’
13 AIB to sell more than 500 ATMs to Brink’s
14 Belgian woman dies after drinking wine containing MDMA
15 UK says it could abandon Brexit trade talks in June
16 ‘Nobody cares’: Children freeze to death as Syrians flee onslaught in Idlib
17 Boy who lost part of foot in lawnmower accident settles case for €725,000
18 Coronavirus and the etiquette of working from home
19 What is coronavirus and what should I do if I have symptoms?
20 Buy yourself a dream... with the planning headaches sorted
21 Newton Emerson: Letting IRA exist just enough to not exist taints politics
22 Mass gatherings due to go ahead in Ireland amid coronavirus outbreak
23 Want to protect yourself from coronavirus? Then wash your hands
24 Any decision to restrict St Patrick’s Day parade ‘premature’, says tourism body
25 Citi names Limerick native Cecilia Ronan European unit chief
26 ‘Our Irish breakfast here isn’t quite as good as my mammy’s at home’
27 Dave Hannigan: Tyson Fury, Trump’s perfect heavyweight champion
28 Anne Harris: Sinn Féin has a real problem with contrition
29 Owen Doyle: Ireland were fortunate to keep full complement on pitch
30 Annual St Patrick’s Day trips by politicians to be curtailed
31 Dublin workers earn on average 15% more than rest of State
32 2020 International Booker Prize longlist revealed
33 Cancellations and confusion as coronavirus threat edges closer
34 Even left-wing Democrats baulk at Europe’s idea of social democracy
35 Restaurant rejigs: Canteen and Sage change direction as pop-up moves in
36 Kevin de Bruyne: City players ‘surprised’ by Guardiola tactics
37 Sealing the deal: how to buy a house at the right price
38 Irish in-flight entertainment firm blames coronavirus for closure
39 State would need 16 fighter jets for full air defence capability, expert says
40 Unwillingness to swallow bitter pill of higher EU budget share ‘shocking’
Real news has value SUBSCRIBE