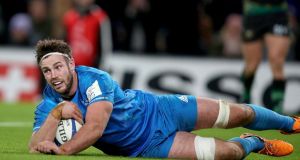 The form and fitness of Leinster’s Caelan Doris offers a compelling case for him to start against Scotland. Photograph: Bryan Keane/Inpho

The first significant landmark of the new dawn for Irish rugby arrives in the Algarve on Tuesday when Andy Farrell unveils his first team selection as a head coach for next Saturday’s 2020 Six Nations opener against Scotland (kick-off 4.45pm).

The slate has been wiped clean and an infusion of fresh faces have forced their way into the 35-man squad. They have been based in Portugal since last Wednesday and, with there being no benchmark selection by Farrell and his re-jigged Irish coaching ticket beforehand, it makes this team announcement trickier to predict than for many years. There are also a host of close calls to make.

Of the newcomers banging on the door, it would be no surprise if the hitherto uncapped 21-year-old Leinster duo of number eight Caelan Doris and hooker Ronan Kelleher force their way into the match-day 23 to face Scotland.

Kelleher’s lack of game time due to the fractured hand he suffered in early December may delay his first test start, with Ulster’s Rob Herring the most experienced of the trio of hookers likely to wear the number two jersey. But at the very least Kelleher is likely to be on the bench.

The form and fitness of Doris offers a more compelling case. A very complete all-round ‘eight’, potent ball carrier, strong defender and good footballer, he has been marked out as a test match animal in the waiting.

Farrell and co would be reluctant to sacrifice CJ Stander’s exceptional work-rate on both sides of the ball, not least as he performed in typically tireless style during the World Cup and has maintained that high volume for Munster this season. Conceivably, Stander might switch to the blindside at the expense of his Munster captain Peter O’Mahony.

The two decisions at loosehead and tighthead also appear up for grabs while Devin Toner and Ultan Dillane are pushing hard for inclusion in the second row. But Iain Henderson’s form in leading Ulster’s charge to the knockout stages of the Heineken Champions Cup ought to merit his retention alongside James Ryan, one of the starting XV’s few absolute certainties along with the captain Johnny Sexton (whose recovery from his knee injury was always on course to make him available for this game) and Garry Ringrose.

The most debated decision has been, and will most probably remain, that of scrumhalf. John Cooney’s form has elevated him to a new level and he is certainly coming up with more big plays and tries than Conor Murray or any other scrumhalf around.

However, Cooney’s place-kicking abilities are in essence irrelevant when it comes to this choice given nobody will be grabbing the kicking tee from the skipper. Furthermore, Murray’s Irish record half-back partnership with Sexton counts for something, as does his improved form of late. His passing and box-kicking has been better and his defence has remained as strong as ever - a factor which will surely count with Farrell. Likewise, as Brian O’Driscoll has pointed out, so will Murray’s working relationship over two Lions tours.

Only once did Joe Schmidt have Robbie Henshaw, Bundee Aki and Ringrose all fit and available for the same match, and he solved that riddle by shifting Henshaw to fullback for the opening Six Nations defeat at home by England last year. So we never really knew who his first-choice Irish midfield was.

Ironically, if almost inevitably, with all three fit and in camp, we will find out Farrell’s preferred pairing straight away. In truth, given the way Ringrose is tearing things up for Leinster at outside centre, it’s now a question of which one partners him. Aki’s form has been very strong for Connacht, with whom he has committed his future again, but it could be that the Leinster 10-12-13 axis of Sexton, Henshaw and Ringrose will count against him and see the trio re-united against the Scots.

Nor does the intrigue end there, for the composition of the back three could see any trio from five picked to start, albeit presuming Jordan Larmour is passed fit, and Farrell’s comments about the game-breaking Leinster fullback suggests he’s a serious doubt due to the foot injury he suffered last Saturday week away to Benetton.

Even if fit, it could be that Farrell and co opt for Will Addison at fullback. He’s still prone, if less so, to the odd defensive mistake but he gives Ireland something different and but for his succession of injuries the classy Addison would surely have been looked at before.

This could mean Larmour starts on the wing, if fit, or if not, perhaps Andrew Conway will edge out Keith Earls. Jacob Stockdale’s return to try-scoring, creative and strong-running form is likely to see him retained.

That still leaves a few issues on the bench, some of which are as fiendishly difficult to call. Dillane might bring more dynamism to the bench than Toner, and a third uncapped player, Max Deegan, can cover across the back-row, although it would be a big call to omit O’Mahony.

Unlike for some time though, this is open to serious speculation, not least as Farrell has further broken with recent custom by unveiling his hand on a Tuesday rather than two days later.