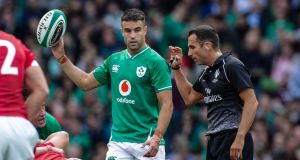 Raynal, who red carded CJ Stander for a collision that knocked out Springbok outhalf Patrick Lambie in 2016, has a decent feel for the game having played junior level for his native Perpignan. It’s safe to assume the 38-year-old will allow Stuart Hogg and Johnny Sexton express their opinions but, it being his only Six Nations match, he’ll also want to stamp his authority. The potential, however unlikely, does exist for some calls to be lost in translation between a French ref, Kiwi Television Match Official Glenn Newman, Argentinean touch judge Federico Anselmi and Pascal Gauzere (also French). During the third test against Australia in 2018, Sexton hilariously informed Gauzere: “I’m the captain, so you have to talk to me. I know you hate me, but you have to talk to me.” It should be noted that grudges between players and officials tend to last seconds not years but all the referees must now talk to the new Ireland captain.

After all these years, familiarity breeds respect as the experienced 44-year-old knows how to run a game while feeding clear information to Sexton and Alun Wyn Jones. Poite used to have a stubborn streak in the heat of battle – there was that salty fallout with Paul O’Connell in Limerick – and while the third Lions test in 2017 will follow him around forever, there must be a good reason why he still gets the biggest games. Dived headlong into the World Cup’s major controversy (not the Typhoon) by choosing to sin-bin two Samoan players for separate high tackles on Russia’s Vasily Artemyev. Both were subsequently upgraded to suspensions. The yellow cards embarrassed World Rugby’s referee chief Alain Rolland as the Irishman had made it crystal clear that such contact would lead to instant dismissals.

The South African can be a divisive figure. Two examples are his handling of the All Blacks brutal 2016 victory in Dublin when he deemed high tackles by Sam Cane and Malakai Fekiota did not warrant the ultimate on field sanction. Peyper seems to share a hurling ref’s desire to pocket his whistle and let the game flow whenever possible. However, the 39-year-old was ruled out of consideration for the World Cup semi-final between England and New Zealand last year after posing with Welsh fans while swinging his elbow in the immediate aftermath of sending off French lock Sébastien Vahaamahina for elbowing Aaron Wainwright in the face.

Perhaps funny at the time, it proved to be a very foolish decision. “It will be a massive regret for him,” said former referee John Lacey on Newstalk. “To be honest, he’s a funny guy. He likes to go for a beer after a match and enjoy himself because it’s a tough job and you just and try to have a bit of a release and get out there.” Forgiveness comes in the form of this monumental clash at Twickenham. Huge call. And yes, there’s previous with Sexton – “You give them everything,” Sexton was heard saying after the Lions first Test loss to New Zealand in 2017 when Peyper reminded the outhalf that he was “not the referee” and “to keep his arms down.” Again, presumably, they have long since buried the hatchet.

Forced to retire in 2012 aged 28 due to repeated concussions, the former Queensland, Racing 92 and Wasps scrumhalf sent off Bundee Aki at the World Cup. He was following the letter of the law. The Samoa match was Sexton’s first as Ireland captain so there’s a recent shorthand between them. Berry also gave John Quill his marching orders for belting into Owen Farrell during the US Eagles game against England in Kobe. Again, it was the correct decision. A valuable and rare transfer from top end professional to referee, at 35-years-old the Australian has a bright future. Pity he doesn’t get one of this year’s major Six Nations ties as his instinct for the game is superior to most of the old guard.

The 2018 Champions Cup final was barely in the books when Barnes heard a rap on his changing room door underneath the San Mamés Stadium in Bilabo. Donnacha Ryan came bearing gifts. The first beer was going down when Tadhg Furlong arrived with another stack of Heineken. Cute hoorism from these Tipperary and Wexford rogues or a sign of widespread respect? Both, probably. Paris could prove a fitting farewell to the Test arena for a referee who has seen it all. Slaughtered in every New Zealand nook and cranny after France’s miraculous World Cup quarter-final victory in 2007, the Englishman kept coming back for more to become one of the most reliable modern officials. Barnes does like to stamp his personality on a match. Ireland have struggled on his watch with the 2015 defeat to Wales in Cardiff – which ultimately cost a Grand Slam – being one of several occasions when his decision making proved very costly. Still, did you remember who was reffing at the Aviva stadium the night Ireland beat the All Blacks in 2018? The game, and most captains, will miss him when he’s gone.