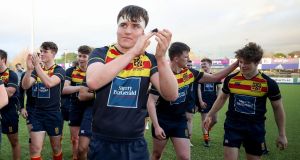 St Michael’s have been rightly lorded as the main conveyor belt of talent within the Leinster machine and begin the defence of their Leinster Schools Senior Cup crown at Lakelands Park on Thursday. Opposing them will be Temple Carrig School, who are the outstanding story of this or perhaps any other season.

For them to be facing St Michael’s is akin to Uruguay playing the All Blacks in the World Cup, or Brentford somehow qualifying for the Champions League and being drawn against Real Madrid, in terms of pedigree, budget, facilities and player pool.

The Greystones-based school did not even exist six years ago. Established in 2014, this is their first Leaving Cert cycle. As evidence of Greystones’s growth and need for another school, in that first year 130 pupils enlisted with Temple Carrig, of whom 68 were boys. They have a similar number in their first Leaving Cert cycle, with 792 pupils now in total. Beginning with pre-fabs and a car park, the school is unrecognisable now.

In Temple Carrig’s first season at Junior Cup level, 2016-17, they won the second-tier Fr Godfrey Cup, beating beat Wesley College 12-10 in the final before being handed a tough draw against Belvedere College, and have lost seven of that squad through injuries, moving on or taking up other sports.

Indeed, whereas St Michael’s and others make no secret that they prioritise rugby, Temple Carrig’s founding headmaster Alan Cox has been hugely supportive of the school’s rich variety of sports, be it soccer, Gaelic football, athletics, basketball or hockey (they also place a big emphasis on drama, concerts and musicals).

Their sole pitch is a hockey one, and whereas St Michael’s have two all-weather pitches and a gym, Temple Carrig are indebted to Greystones RFC giving them Dr Hickey Park for their home matches, and a public gym.

Temple Carrig’s training area is a well-worn patch of grass measuring about 20 x 40 metres which is used by their two Under-12, two Under-13, JCT, TY and SCT sides.

At senior level, Temple Carrig chose to compete in the second-tier Vinnie Murray Cup rather than go into the developmental (third) section and made their debut last season with a squad comprising transition-year and fifth-year students. They reached the semi-finals where they lost to CUS.

Yet after a short pre-season, this campaign did not start promisingly. St Andrew’s beat them by 43 points on September 4th, then lost to Newpark and Salesians College, Celbridge. Numbers were low and they were struggling.

A narrow victory over Clongowes thirds gave them that winning feeling. Baby steps, and they haven’t lost a game since October 16th.

Come the first round, they beat St Andrew’s College (established in 1894) by 25-22 to earn a second-round derby against Pres Bray (est 1921), their big brother down the road. Many of the players on both sides would have started playing mini rugby together with Greystones. Back in 2014, Temple Carrig’s first ever rugby match, at under-12s, was against Pres Bray.

Temple Carrig trailed 15-3 at half-time, but came back to win 21-15 through tries by Cormac Coffey and James Smartt, along with 11 points from the boot of Thaide Shanahan. In the semi-finals, and their third game at Energia Park, Temple Carrig beat The High School (est 1870) by 21-14. Level at 7-7 after an even first half, Temple Carrig pulled clear through tries by their outhalf Liam Leonard and their scrumhalf Paddy Byrne.

Mark Crean, the school’s PE teacher, director of rugby and extra-curricular co-ordinator, who has seen this team grow from under-12s to this season’s stunning achievements, attributes it to their collective work ethic.

After playing with Greystones for two years following school, Crean studied physical education in St Mary’s in Twickenham and stayed in England for 15 years as a PE teacher and coach. His last seven years there were with St George’s College in Weybridge, not a renowned rugby school, although it did produce Anthony Watson under Crean’s time as director of rugby.

In contrast to St Michael’s (est 1944) and their array of rugby and S&C coaches, and incomparable rugby budget, all Temple Carrig’s voluntary coaches are teachers. Crean has coached all their sides along with the ex-Old Wesley and Leinster prop Henry Hurley, an economics teacher in the school until becoming headmaster at Woodbrook College in Bray. The arrival of Eddie Bailey, a woodwork teacher, in September offset Hurley’s loss.

Number eight Patrick Kieran has been their captain throughout their journey from under-12s, their athletic centre Cian Hingerty played for the Leinster Under-19s last season, blindside Cillian Burke is another important player for them, as is Shanahan, man of the match against Pres Bray. But, in the main, it has been a remarkable squad effort.

As most of the players play other sports, Temple Carrig have a policy of not playing rugby matches at weekends, although this season they have trained on Saturdays.

Part of the appeal of schools cups is that ex-pupils support their former schools and renew old friendships and loyalties. Temple Carrig are the only school in the competition without ex-pupils, until next year anyway.

They are also the only non fee-paying school in the first round. It’s doubtful any team will face a more daunting task than Temple Carrig next Thursday, given St Michael’s have four schools internationals and about 17 representative players.

You hope they emerge relatively unscathed. Then again, they still have the Vinnie Murray Cup final against King’s Hospital and the Leinster 1B League final against Newpark, and after achieving so much, Temple Carrig really have nothing to lose.