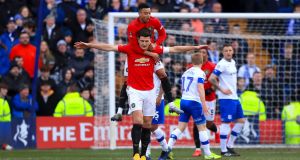 Wayne Rooney has been handed the chance of facing his former club – if Derby County can overcome Northampton in their FA Cup fourth-round replay.

Manchester United were paired with a trip to either Rooney’s current Championship side or Keith Curle’s League Two Northampton in the fifth round draw. Rooney – after signing for Derby in the January window – has already had a hand in disposing of a Premier League side, playing a key role in the 1-0 third-round victory over Crystal Palace earlier this month.

United’s all-time top scorer enjoyed a glittering 13-year career at Old Trafford before returning to Everton in 2017. The FA Cup holders Manchester City will travel to Sheffield Wednesday while the runaway Premier League leaders Liverpool could face a trip to Stamford Bridge, if their second-string side can see off League One Shrewsbury at Anfield.

Jürgen Klopp confirmed on Sunday that he will play a young side in the February replay as the first team will be enjoying their winter break. Championship leaders West Brom’s reward for beating West Ham is a home tie against Newcastle or Oxford.