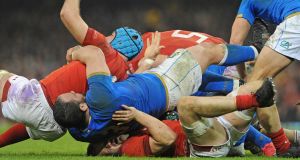 The current mess surrounding refereeing of the breakdown looks set to continue in this Six Nations. Photograph: Ian Cook/ CameraSport via Getty Images

I bumped into an old friend the other day.

“How come rugby has arrived at where it is today, and what will happen in the Six Nations?” he asked. So, we went for a coffee . . .

Firstly, the law book does not seem to be read, or understood, as completely as before. The referees’ knowledge of the laws seems less than comprehensive.

For example, I watched an interesting TV debate on the scrum recently, which included a leading international referee. A couple of suggestions were made as to how best it could be sorted. One of these suggestions is already in the law, yet none of the panel were aware of it.

Previously, the laws were sacrosanct – player actions, and how they should be refereed, were measured and considered against the written word. If you don’t have this approach, anarchy is not very far away.

The modus operandi now, in sharp contrast, is for referees to study video clips of player actions and decide which can be tolerated, and which can’t. Sometimes, when agreement can’t be reached, the loudest most confident voice prevails whereas the answers invariably lie in the good book.

It’s crazy stuff, which started to creep in some years ago, as coaches pushed the boundaries past their limits and, bit by bit, the referees went along with things. And that has brought us to where we are today.

The current mess surrounding refereeing of the breakdown is what it is for just these reasons, and it is at the point where pretty much everything is contrary to law. If words were written to match what’s happening, they would be the polar opposite of what it says in the laws. Riddle me that, please.

Imagine, for a moment, if the laws of the land were interpreted in such a cavalier fashion.

Remember the ‘gate’, which was a useful application of law? It meant that players arriving at the breakdown had to enter from the direction of their own goal line and was defined as the width of the tackle. Therefore, it could vary and it helped to eliminate side entry. Where has it gone, as we now watch a violent version of Star Wars?

But, as my friend and I chatted, we did recall a handful of side-entry penalties in the Heineken Cup, and wondered could there be at least a glimmer of light at the end of the tunnel? We definitely hoped so, and the Six Nations will tell us a lot.

As is well documented, there have been really serious injuries in this area, and the early-forced retirements of outstanding players. The attrition rate cannot be allowed to continue.

That brought the two of us to another question.

What is the legal position if a seriously injured player takes an action against World Rugby and the referee for not ensuring its own laws are enforced. We didn’t find it hard to conclude that they’d be in a serious bind. Then, what would the insurers say? It’s a minefield.

There is another serious bugbear: The various professional competitions such as Pro14, English Premiership, Top 14 and Super Rugby also introduce their own nuanced variations and further confusion ensues.

It’s a strange game when many followers in the Southern Hemisphere don’t like the fare on offer in the Northern one and vice-versa.

It’s well nigh an impossible job for the World Rugby elite referee manager - who must cover the whole world to control everything which is happening, and, inevitably, he can’t keep everyone happy. It seems clear that staffing levels need to be beefed up to ensure consistent and coherent application of rugby law around the globe.

In all of this there is – believe it or not – a good system in place when there is doubt as to law interpretation: Any union, and World Rugby themselves, can ask for a law clarification – basically, a union asks a straightforward question in relation to player actions, and their legality or otherwise.

The responses from the designated World Rugby group invariably followed the law as written. Surely this is the proper and logical way of dealing with stuff, not a vote or show of hands. It was a proper process, it made complete sense, and everything was properly documented and copied to all unions. The current system is chaotic by comparison.

That process still exists, but as I explained this I found myself using the past tense – the number of clarifications sought has dwindled in recent years.

What’s also needed is some sort of laws oversight group whose job would be to survey the game on an ongoing basis, and call a halt to practices that are clearly outside the law as soon as they arise. Referees could then be told how to apply law correctly when and where necessary; rather than reaching their own conclusions which have not been tested against it. That’s the way it should work.

Of course, all stakeholders (including players, coaches, referees) should have a say in law proposals, but these people are transient, and the game is permanent. So, any proposals should have to be in line with a clear set of principles – and not be confined only to those running professional rugby.

By now, coffee had morphed into an enjoyable lunch. We shook hands as we said our goodbyes. We also shook our heads.

PS: A special word of congratulation for Ireland’s Andrew Brace whose welcome appointment to France v Italy ends a barren period for Irish referees at the top table.