Crowds and viewing figures get Allianz League off to hot start 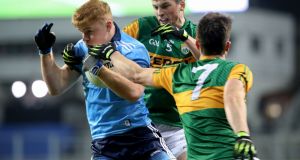 Dublin will have been glad to get their AFL campaign off to a positive start under new manager Dessie Farrell, who made his own distinctive mark by becoming the first manager of the county in over 30 years to open his account with a draw in the league.

For a team that had been on holidays until little over a week before the new season began in earnest, a draw against the county expected to be their biggest rivals this year and who led by three in the 65th minute was more than acceptable.

It did also mean that Dublin haven’t won just one league match against Kerry in four seasons, a sequence covering five matches – three in Croke Park and two in Tralee and if championship is thrown into the mix, they have won just two of the last seven encounters – including the most important one, last year’s All-Ireland final replay and the record five-in-a-row titles that it delivered.

On the face of it, Kerry’s emerging team appear to be closing in on Dublin but that’s why Saturday night in Croke Park represented an ideal opportunity to make a statement against the champions and, whereas David Clifford’s late free to equalise spared Peter Keane’s side the setback of being beaten, they will be disappointed not to have gone one better at the start of what can be a defining year.

As things stand, Kerry have just one win over Dublin at Croke Park in the past eight years and nine matches. They’re unlikely to get too dismayed at this point – particularly as neither last year’s win in Tralee nor the league final victory in 2017 paid out during the following summer’s championship.

What is unequivocally the case is that the deepest rivalry in football continues to be a major draw. Saturday’s attendance of 42,502 was the biggest for a regulation league match since 2012 when, a few months after the watershed 2011 All-Ireland final, 46,836 turned up to see Kerry administer a reality check to the new champions.

These attendances outstrip all league finals in the last decade – apart from those between the counties in 2016, which was a special 1916 centenary event and attracted a capacity crowd of 82,300, and the following year, attended by 53,840.

The live broadcast on RTÉ also delivered a big audience by league standards last Saturday, 392,000 representing a 32 per cent share of those watching television and peaking at over half a million, 507,400.

This compares well with last season’s league final between Kerry and Mayo, which was TG4’s most watched programme of 2019. It captured 265,000, peaking at 396,000 and representing 30.4 per cent of the available TV audience.

It’s too early to learn very much about any difference of approach by the incoming Dublin manager but it was interesting to see Philly McMahon, Kevin McManamon and Paddy Andrews starting, as all three were freely associated with potential retirement after the five-in-a-row had been completed.

Signing up for the opening match of the league doesn’t guarantee summer involvement but in recent years, only Paul Flynn announced his retirement between league and championship.

If there were any straws in the wind, perhaps they could be glimpsed in Conor McHugh’s starting the match as a late replacement for Paul Mannion. McHugh has a glowing under-age portfolio at corner forward but hasn’t yet managed to translate it to senior championship level although Jim Gavin has involved him in league campaigns and he has seen occasional championship action.

He is a club-mate of Farrell’s at Na Fianna and was also on the manager’s All-Ireland-winning teams at minor and under-21 in 2012 and ’14. It will be interesting to see if that influence can complete his transition.

1 Gerry Thornley: After 32 weeks the Six Nations is back up for grabs
2 Extremes of sweet and sour for Solskjaer as Man United show signs of revival
3 Stockdale and Ringrose on board with expansive Irish game plan
4 GAA expected to go ahead with championship under Level 5
5 Bennett girding his loins for impossibly unpredictable Vuelta
Real news has value SUBSCRIBE

Arsène Wenger: Arsenal was a matter of life and death to me 10:06
Extremes of sweet and sour for Solskjaer as Man United show signs of revival 09:35
Slaven Bilic hits out at €16.95 pay-per-view for West Brom’s draw with Burnley 08:31
Patrick Mahomes shines as Kansas City beat Buffalo Bills 08:14
Intercounty season to continue under Level 5; the state of play as Six Nations resumes 07:49