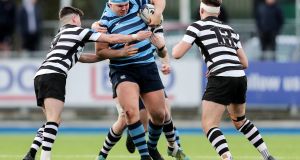 Castleknock needed every one of their 19-point lead to hold off resurgent Roscrea in this Leinster Senior Cup humdinger at Energia Park.

There was an element of payback for Castleknock from this one for their Leinster League semi-final exit to Roscrea in December, the key to which was the latter’s lightening first quarter.

’Knock went about establishing their game plan early on, taking the advantage of territory to get their runners on the front foot, number eight Ian Bermingham leading the way. Their mood dictated they needed no second invitation to make good on their threats, yet that is what they got when Roscrea’s lineout malfunctioned.

The ball to the back drifted well beyond its intended destination and scrumhalf Conor Duggan hoovered up the ball and the metres, Bermingham following on his shoulder and, in time, Fergus Stanley driving home from close range, Louis McDonagh converting.

Roscrea didn’t seem too bothered at this stage, their forwards carrying and handling well enough to set up a five-metre lineout.

This time, they were clever in using prop Shane Connolly in a peel to the front, lock Martin Fallon in support to find the line in the 14th minute.

However, Castleknock’s sharpness in attack looked decisive, that man Stanley showing up for his second try at the posts and prop Ben Griffin’s soft hands giving centre Conor Dunne a clear path to the line, captain McDonagh making it three-from-three conversions for a 21-5 lead at the break.

The Roscrea garden didn’t look any rosier when ’Knock came calling once again, Stanley breaking the first tackle only for Fionn Gibbons to spill the ball.

It didn’t seem to matter all that much when play was called back for a penalty, Fionn McWey-Fingleton binned and McDonagh adding a penalty in the 44th minute.

Roscrea were a man down and 19 points adrift with little reason to be hopeful, never mind confident, based on what had gone before.

Their forwards stepped up to take the challenge, lock Fallon spotting space on the short side and rumbling with tighthead Shane Connolly for extra muscle.

It was all the encouragement they needed. Their tails were up and they rolled forward, Conall Bird’s angled kick good for a gain of 50 metres.

From that point, it was all hands on deck for Castleknock as they held firm to preserve their lead.