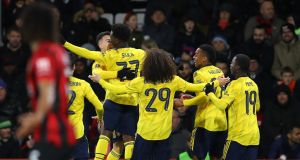 Bukayo Saka of Arsenal celebrates with teammates after scoring his team’s first goal during the FA Cup Fourth Round match against Bournemouth. Photo: Warren Little/Getty Images

If this is what Mikel Arteta’s vision for Arsenal’s future looks like then the club should be in very safe hands. First-half goals from youth team products Bukayo Saka and Eddie Nketiah secured a first away victory for their manager since he succeeded Unai Emery that sets up another trip to the south coast to play Portsmouth in the fifth round.

Along with the impressive Joe Willock and Gabriel Martinelli, Arteta’s decision to field a starting lineup that featured four players aged 20 and under paid dividends here with an all-action display that left Eddie Howe’s side chasing shadows at time during the first half.

After some promising signs in recent weeks, their manager will be hoping it can prove to be a significant turning point in their season.

Arteta won this competition with Arsenal twice as a player, in 2014 and 2015, and had stressed the importance of using it as a springboard for the future before this tie. Perhaps with that in mind, he handed Nketiah his first start since his return from a loan spell with Leeds alongside Martinelli and record signing Nicolas Pépé in attack, while Mattéo Guendouzi and Willock were recalled in midfield.

The late comeback against Chelsea last week after David Luiz’s red card in the first half offered proof of Arsenal’s growing team spirit under their new manager and that was very much in evidence in the opening exchanges here. Saka has been pressed into emergency cover at left-back in recent weeks but the way he took his opportunity in the fifth minute suggests that he could make an unfamiliar position his own.

A driving run from Willock created the chance, with Martinelli’s perfect touch allowing Saka to hammer the ball past Mark Travers at his near post.

Bournemouth have reached the fifth round once in their history, although Howe elected to field several of his first-choice side. Despite the confidence-boosting victory here over Brighton last Tuesday that lifted the pressure on their manager for the time being, the hosts struggled to find a foothold.

Willock could have doubled their lead in the 20th minute had he directed his shot either side of Travers before the midfielder’s excellent pass found Saka in acres of space on the left to supply a perfect cross that was tapped home by Nketiah.

In response, Harry Wilson’s effort was parried away by Emiliano Martínez and Dan Gosling then somehow failed to hit the target with a free header five minutes before the break.

Arsenal’s defence featuring Sokratis Papastathopoulos and the error-prone Shkodran Mustafi seemed to be standing firm – a relief for Arteta after a move for the Flamengo defender Pablo Marí reportedly hit the skids over the £7.5m proposed fee earlier in the day.

A small pocket of visiting supporters even started to chant Mustafi’s name just before the whistle blew for half-time.

Having seen his side totally outplayed, Howe sent his players out early for the second half. But once more it was Arsenal who dictated the pace of the game largely prompted by their teenage duo on the left.

Martinelli has been a revelation since he joined from Brazilian side Ituano in the summer and looks more natural cutting inside than either Pierre-Emerick Aubameyang or Alexandre Lacazette. Adam Smith’s agricultural challenge on him inside the first five minute of the half was recognition of the 18-year-old’s growing influence before a scuffle between Gosling and Guendouzi finally appeared to rouse the home supporters from their slumber.

Mustafi was fortunate to get away with one lapse when he collided with Martínez as he chased back, with the defender eventually taken off on a stretcher and replaced by Rob Holding following a long delay.

Jack Simpson almost gave Bournemouth hope soon after when his header from a corner whistled just past the post with Martínez stranded.

Arteta then threw on Dani Ceballos for his first appearance since the end of November in the week that he insisted the Real Madrid loanee remains part of his plans. The 23-year-old could yet end up playing a more important role but he was largely confined to defensive action, however, as Bournemouth turned to top scorer Callum Wilson in a desperate attempt to force a replay.

Some desperate last-ditch defending from Héctor Bellerín denied Gosling the chance to set up a grandstand finale as Arsenal stood firm until substitute Sam Surridge’s late consolation. There will be bigger challenges to come, but this was a good way to start. – Guardian

1 Owen Doyle: Day of the jackal may be coming to an end
2 Ireland wary of Peyper calling the tune as they head for Twickenham
3 Andy Farrell ticking all the boxes in advance of England showdown
4 Players impressed with Bono’s Irish pride and desire
5 David Brady says he has witnessed the illegal payments of GAA managers
Real news has value SUBSCRIBE