Trump war with media to be fought with ‘alternative facts’

Analysis: US president brings his ‘running war’ with media and truth to White House 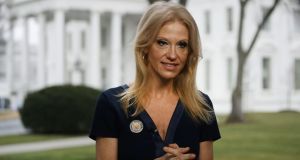 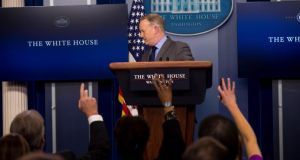 He is continuing as he campaigned and started his presidency as he means to go on.

Donald Trump did not just drag the bitterness of the election into his angry campaign speech that masqueraded as an inaugural address. He has extended his “war” on the media into his presidency too.

For a thin-skinned man whose fragile ego needs stroking with flattery, size matters. Poll numbers, the turnout at rallies and even the size of his penis when it was once mocked are important measures to affirm his standing.

Put simply, the US president likes to be liked and lashes out when it is suggested that he is not.

If Friday’s inaugural address was about trashing the Washington establishment for overlooking the American people, his first full day in office on Saturday was dominated by a strange assault on the media.

Absent from his 15-minute address at the US Capitol, reporters were the target of his rambling 15-minute speech at the CIA’s headquarters in Langley, his first official visit as the 45th president, the following day.

The Republican falsely accused the media of inventing a “feud” with the US intelligence community and for understating (again falsely) the size of the crowd that attended his inauguration. Remember, size matters.

“I have a running war with the media. They are among the most dishonest human beings on Earth,” he said, ripping the fourth estate for suggesting that he did not see eye to eye with the intelligence community.

Mostly though he bragged – about his popularity among the military, his youthful energy, his cabinet picks, his intelligence – “Trust me, I’m like a smart person” – and the size of his inauguration audience.

Former CIA director John Brennan, in response, issued another stinging put-down in their non-feud. Trump “should be ashamed of himself,” he said, for his “despicable” and “self-aggrandising” comments in front of the Langley’s sacred memorial wall of 117 stars, each representing an unnamed agent killed in the line of duty.

The first full day of the Trump presidency turned even more bizarre when his press secretary Sean Spicer later called the media to a press briefing, his first at the White House, to yell at them for their “false reporting” that the attendance at Barack Obama’s first inauguration in 2009 surpassed the crowd at Trump’s on Friday.

“This was the largest audience to ever witness an inauguration, period,” he declared. This was blatantly untrue and photos proved it, undermining Spicer’s credibility at the start of the administration.

“This is called a statement you’re told to make by the president. And you know the president is watching,” Ari Fleischer, one-time presidential press secretary to George W Bush, tweeted.

While the issue of crowd size was moot, the telling of the lie marked a self-destructive moment for the Trump White House. It signalled that the new president’s long-running penchant for choosing his own facts will continue in office.

More ominously, Trump’s press secretary appeared to threaten to circumvent the media, warning reporters that the president “will take his message directly to the American people”. This follows a proposal recently floated that the administration may move the White House press corps out of the White House.

Trump’s chief of staff, Reince Priebus, offered a stronger warning on Sunday, attributing the reports on crowd size to “an obsession by the media to de-legitimise this president” and vowing to “fight back”.

Kellyanne Conway, one of Trump’s top aides, said that Spicer was offering “alternative facts,” entering a chilling new Trumpian description for falsehoods the White House is willing to peddle from the outset.

The multi-pronged attack from the administration illustrated that Trump has every intention of escalating his long-running “war” with the “dishonest media” to protect his “alternative facts”.

Daniel Patrick Moynihan, the late Democratic senator and one-time member of Richard Nixon’s staff, famously said that people are entitled to their own opinions but not their own facts.

Among the baggage Trump has brought to the White House is his own “truth” – a horrifying prospect, particularly when he has to make statements about matters far more important than the size of a crowd.