Trump feuds with media over size of inauguration crowd

Inauguration watched by 30.6 million TV viewers in the US, seven million fewer than Obama’s first ceremony

Donald Trump attacked the 'dishonest media' in speech at the CIA headquarters before his Press Secretary, Sean Spicer, held a conference disputing the photographic proof of the crowd size at President Trump's inauguration. Video: The White House 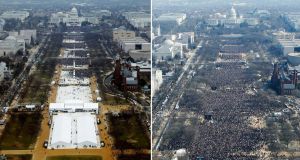 Crowds on the National Mall in Washington DC just before Donald Trump’s inauguration in 2017 (left) and Barack Obama’s in 2009. Photograph: Reuters 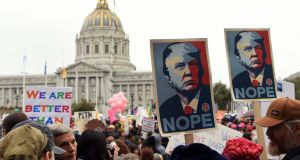 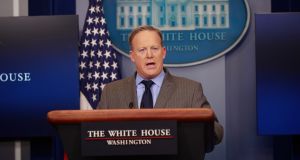 White House press secretary Sean Spicer during a briefing at the White House in Washington on Saturday where he accused the media of engaging in “deliberately false reporting.” Photograph: Doug Mills/The New York Times 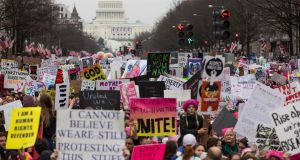 On his first full day in office, president Donald Trump accused the media of undercounting the size of the crowd at his inauguration and falsely reporting that he was feuding with US intelligence agencies.

Speaking on a visit to CIA headquarters on Saturday afternoon, he claimed that a TV news network reporting on his inauguration on Friday said that 250,000 people attended when he claimed that there were “a million, million and a half people” on the National Mall in front of the US Capitol as he was sworn in.

“We had a massive field of people. You saw them. Packed. I get up this morning, I turn on one of the networks and they showed an empty field,” he said.

Mr Trump insisted that the crowd at his inauguration stretched all the way back to the Washington Monument, about halfway down the mall, contrary to photographs showing this to be inaccurate.

“This was the largest audience to ever witness an inauguration, period - both in person and around the globe,” he told reporters in a unscheduled, pugnacious statement after which he did not take any questions.

His remarks came after more than 500,000 people attended a rally on the National Mall in support of women’s rights where the crowds appeared to surpass the turnout at the presidential inauguration.

Watched protests yesterday but was under the impression that we just had an election! Why didn't these people vote? Celebs hurt cause badly.

At the Woman’s March on Washington and sister protests in cities across the US and around the world, protesters pledged to stand up to Mr Trump, criticised his misogynistic remarks and claimed that he was an illegitimate president because he lost the popular vote.

The press briefing - Mr Spicer’s first to journalists at the White House - came at the end of a bizarre first full day in the Trump administration and an escalation of its acrimonious relations with the media.

Mr Trump had travelled to the CIA’s base in Langley on the first official visit of his presidency to patch up relations after he claimed that the intelligence agencies had leaked an unverified dossier alleging that the Russians had compromising information about him and that his campaign had contact with the Kremlin.

He claimed that the media had fabricated his dispute with the intelligence community.

“I have a running war with the media. They are among the most dishonest human beings on Earth,” he said. “And they sort of made it sounds like I had a feud with the intelligence community. And I just want to let you know, the reason you’re the number-one stop is exactly the opposite. Exactly.”

He pledged his support for the agency “1,000 per cent,” he said. “I just wanted to really say that I love you. I respect you. There’s nobody I respect more. You’re going to do a fantastic job. And you’re going to start winning again,” he concluded.

The new president castigated the intelligence community claiming in a tweet earlier this month that they leaked the “fake news.” He likened their behaviour to the practices of the Nazi Germany.

The Republican has repeatedly questioned the intelligence community’s assertion that Russia interfered in the presidential election by hacking Democratic computers to help influence the outcome in his favour.

Mr Trump made his remarks in front of the CIA’s memorial wall of 117 stars, each representing an unnamed agent killed in the line of the duty. The memorial is regarded as hallowed ground within US government circles. Mr Brennan reacted angrily to the president’s latest remarks.

“Former CIA director Brennan is deeply saddened and angered at Donald Trump’s despicable display of self-aggrandisement in front of CIA’s memorial wall of agency heroes. Brennan says that Trump should be ashamed of himself,” his former deputy chief of staff said in a statement.

The new president has a reputation for hyperbole and making wildly inaccurate statements.

He regularly claimed that he was performing better than polls numbers were suggesting and that there were much larger crowds attending his campaign rallies when the evidence showed otherwise.

The Los Angeles Times reported that the inauguration was watched by 30.6 million television viewers on Friday, 19 per cent below the audience of 37.8 million for president Obama’s first swearing-in ceremony in 2009.

The figure is based on preliminary data from Nielsen for inauguration coverage, the newspaper said. Ratings for PBS, which were not available Saturday, will add to the final total.

In a scheduling announcement Mr Spicer told reporters that Mr Trump would host British prime minister Theresa May, his first meeting with a foreign leader, at the White House on Friday.

The two leaders are expected to discuss the possibility of agreeing a trade deal between the US and the UK in the aftermath of Britain’s “Brexit” vote to leave the European Union.