Women’s March: More than 500,000 protest against Trump in Washington

An estimated 500,000 people took to Washington DC for the Women’s March on Washington. Similar marches took place across the world from Sydney to Chicago. Video: Reuters/CNN 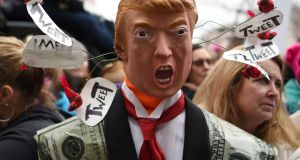 More than 500,000 protest in a Women’s March on the National Mall in Washington DC on Saturday. Photograph: Andrew Caballero-Reynolds/ AFP/Getty Images 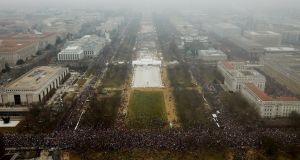 More than 500,000 take part in the Women’s March to protest Donald Trump’s inauguration as the president of the United States in Washington. Photograph: Lucas Jackson/Reuters 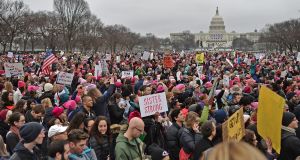 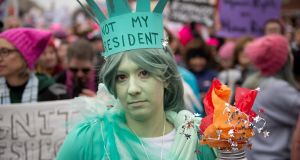 People gather along Independence Avenue for the Women’s March on Washington on Saturday. Photograph:Tracie Van Auken/EPA 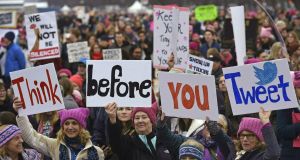 Protesters at the Women’s March in Washington on Saturday. Photograph: Andrew Caballero/AFP /Getty 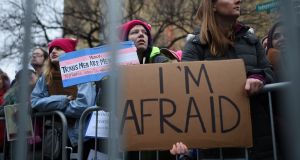 Hundreds of thousands of protesters in Women’s March in Washington. Photograph: Andrew Caballero-Reynolds/AFP/Getty

Hundreds of thousands of people took over the streets of Washington and cities across the United States a day after Donald Trump took office vowing to resist his presidency and fight for women’s causes.

Tens of thousands of protesters filled midtown Manhattan and thousands of women also took to the streets of Dublin Sydney, London, Tokyo and other cities in Europe and Asia in “sister marches” against Mr Trump.

The organisers of the Women’s March on Washington had originally anticipated about 200,000 people to descend on the broad avenues of the US capital for the protest but revised their numbers upwards to more than 500,000 on Saturday, a turnout confirmed by senior Washington DC city official.

The massive crowd forced the organisers to change plans when the entire route that they planned to march on was filled with hundreds of thousands of people.

The crowd stood for four hours to hear speeches from members of the US Congress, women’s rights activists and celebrities such as Hollywood actors Scarlett Johansson and America Ferrara and musicians Madonna and Alicia Keys.

Mr Trump was not at the White House - he had travelled to the CIA headquarters in Langley, Virginia - as the throngs of protesters gathered in the blocks around the presidential residence. The president used his appearance at the intelligence agencies to boast about the numbers that attended his inauguration.

The number of protesters on Washington’s streets, however, ran close in size to, if not surpassed, the turnout for Mr Trump’s inauguration on the National Mall, the green area that runs through the city.

Washington transportation officials said that as of 11am on Saturday, 275,000 people had taken trips on the city’s Metro subway system compared with 193,000 at the same time for the inauguration.

Hundreds of thousands more people came out elsewhere in the country, from Los Angeles to Boston and from Seattle to Key West, Florida in solidarity with the Washington protest that was named after the famous march on the US capital for civil rights and jobs led by Martin Luther King Jr in 1963.

The streets around the main stage of the Washington march, just three blocks from the US Capitol where Trump was sworn in as president the previous day, were awash with demonstrators wearing pint hats and signs promoting women’s issues and chastising the new Republican president.

The hats were conceived as part of a grassroots movement to flood the National Mall with a sea of pink hand-knit, car-ear hats dubbed “pussyhats” in a dig at insulting remarks that the billionaire once made.

Many placards chastised the president for his plans to curb reproductive and abortion rights and his misogynist remarks about women during his presidential campaign and before, including his brags about being able to grab women “by the pussy” and his labelling of Hillary Clinton as “a nasty woman.”

“Build the wall… around Trump,” read one sign. Another said: “Without love America is not great again - make America love again.” “Make misogyny wrong again,” was written on another.

“Today is not a concert, it is not a parade and it is not a party,” one of the march’s organisers Tamika Mallory, a social justice and gun control activist, told the crowd. “Today is an act of resistance.” 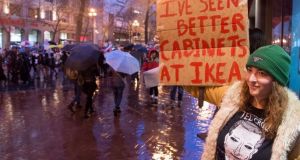 Speaker after speaker warned the demonstrators to mobilise themselves and voice their opposition to Mr Trump and his administration’s plans. They referred to his sexist rhetoric from the presidential campaign and the plans by the Republican-controlled Congress to withdraw funding from Planned Parenthood, the nationwide of clinics that provide women’s and reproductive medical services including abortion.

Latina actress America Ferrara, who supported Hillary Clinton in the election, said that “every single one of us” was under attack by Mr Trump and called on people to resistance to his “credo of hate.”

“It’s been a heartrending time to be both a woman and an immigrant in this country. Our dignity, our character, our rights have all been under attack and a platform of hate and division assumed power yesterday,” she said.

Most of the speakers jabbed the incoming president, who surprised many political commentators by winning 53 per cent of white women votes in the election.

“Okay, we got through day one,” joked filmmaker Michael Moore speaking after Mr Trump’s first day in the White House. “We’re in day two of the Trump tragedy.”

Moore told the crowd that he was appearing at the march “to vow to end the Trump carnage,” borrowing one of the president’s most controversial lines in his inaugural address on Friday when he promised to stop the “American carnage” of crime, poverty, poor education and jobs lost overseas.

“We have to get busy,” Moore implored the demonstrators, telling them call their congressional representatives every day to complain about Trump’s policies and calling out a telephone number.

Feminist author Gloria Steinem, an honorary co-chair of the march, criticised Trump’s cabinet nominees of billionaires and former bankers and his volatile temperament when she addressed the crowd.

“Trump and his handlers have found a fox for every chicken coop in Washington. A Twitter finger must not become a trigger finger,” she said, referring to his unpredictable posts on the social media website.

She said that Mr Trump’s “grandiosity, impulsivity, hypersensitivity and an apparent inability to distinguish between fantasy and reality… was on full display in his inaugural address yesterday.”

Steinem urged the marchers to unite in what is one of the most dangerous times for women’s rights.

“No more asking daddy. We are linked; we are not ranked, and this is a day that will change us forever because we are together,” she said.

Singer Madonna delivered a forceful indictment of the new president, calling his inauguration “this horrific moment”. She caused a stir when she used expletives in her speech that were broadcast on live TV.

“The revolution starts here. The fight for the right to be free, to be who we are, to be equal,” she said.

Protesters travelled from the furthest reaches of the country to attend the march.

Friends Sue Fox, Patricia Hunter and Nami Montague, all 41 years told, travelled from Seattle in the Pacific north-west to participate in protest against Trump.

“I am not an activist but I might become one,” Ms Fox told The Irish Times as she held a sign that read Make America Kind Again.

“I just want the government to know what’s important: equal rights, watching out for the minorities, the marginalised populations - stick together, stand up, make it better.”

Ms Montague said her message to Mr Trump was: don’t think you can trample over long-established policies that “make things better” because he wants to make it better for himself or for business.

“We are here, the people have voice and pay attention because we are coming for you if you are not listening and hearing the people,” she said, holding a home-made sign that read: “Still we rise!!!”

Lucia Philipson (57), an artist who travelled from Florida, held a sign ridiculing Mr Trump’s social media messages, urging him not to tweet until “you finish your history homework!”

“His tweeting not only sets him up for knee-jerk reactions but it ripples down into the American people so if he is alarmed, all the people who voted for him become alarmed and that’s how we got here,” she said.

She hopes that the march will send a message to the new president that large sections of the population - women, the disabled and the gay community - will “not be fooled by him.”

“We’re here and we’re not going away,” she said.