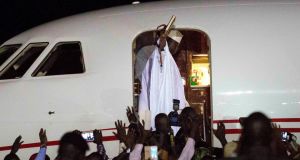 With a kiss of the Koran and a wave from the aircraft’s steps, it was over. Gambia’s authoritarian former president Yahya Jammeh on Saturday night bade farewell to the country he had ruled for 22 years, after failing in a last-ditch bid to cling onto power. His departure marks the country’s first democratic transfer of power.

The country is now awaiting the arrival of the president-in-exile, Adama Barrow, who fled to Senegal for his safety after defeating Jammeh in elections last month. Jammeh is now thousands of miles away in Equatorial Guinea, having corresponded with Barrow on the terms of his exile, which include immunity under the constitution and asset protection.

A statement from regional bloc Ecowas, the African Union and the UN issued yesterday was criticised by some senior coalition figures. But spokesman Halifa Sallah defended international efforts, insisting they had not been drafted in a “willy nilly” fashion.

Steve Cockburn, deputy regional director of Amnesty International, said it was a political declaration designed to give Jammeh the confidence to leave. According to diplomatic sources, the document would not necessarily stand if a national truth and reconciliation process eventually found evidence of personal responsibility for abuses.

Sallah insisted the country was putting reconciliation above retribution. Gambians would have to accept international efforts to solve the crisis, he said.

At Westfield Junction, a major meeting point in the town of Serrekunda, celebrations started soon after Jammeh had left, with people cheering the passing military trucks. Many praised the army for declaring it would not stand in the way of west African troops poised to remove Jammeh by force. But there were also demands for justice for military abuses, with man shouting from a pick-up: “The Gambian army is a disgrace to the nation. All they know is how to beat people.”

Ebrima Jammeh (32), a hotel worker, demanded justice for his father Haruna Jammeh, who was killed by the so-called “junglers”, a shadowy paramilitary hit squad based near the former president’s village of Kanilai. Largely drawn from the Presidential Guard, the group is accused of multiple abuses by Human Rights Watch, including the murders of more than 50 migrants whose bodies were dumped in a well.

People also called for the former president’s allies to be flushed from the country’s main institutions. Jammeh was known for promoting supporters from his Jola ethnic group to top-ranking positions, sowing division with other groups such as the Mandinka, Fulani and Wolof.

“We don’t want anything related to Yahya Jammeh in the system now. Anyone with links to him has to go. The system has to change,” said Haddy Jaton (35) a civil servant.

“The wicked man has left,” said Naffy Trawally (20), a student posing for celebratory selfies with friends. “He did something to our minds. He wanted to corrupt us, developing tribalism.” Trawally had been indoors since the state of emergency had been announced on Tuesday, fearing that Jammeh might not leave, and tip the country into war.

“People are tired now,” said Bouba Jallow (32), a taxi driver. “So many people have left the country. Everything has been shutting down. People have not really left their homes to talk and share. They just want to get on with their lives.”

Jammeh supporters wearing T-shirts with his picture turned out in force to see him off at the airport last night. Prior to the dictator’s departure, The Irish Times met a diehard supporter in charge of wrestling at the sports ministry, who did not want to be named. “Jammeh taught us so much. He taught us how to be patriotic. He did so much for this country,” he said.

The supporter had been certain that Jammeh would survive the showdown. Jammeh, he said, had truth on his side. “He is the truth. “That is why he does not need any protection.”

Nearly 40 per cent of voters backed the former president in last month’s elections.