Merkel to take a wait-and-see approach to Trump 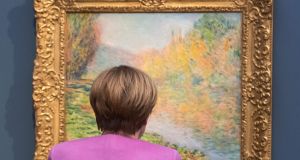 German chancellor Angela Merkel in front of “Banks of the Seine at Jeufosse, Autumn” by Claude Monet during the official opening of the Barberini museum in Potsdam, near Berlin, on Friday. Photograph: Bernd von Jutrczenka

As Donald Trump was sworn in on Friday, Germany’s chancellor Angela Merkel’s verdict was summed up in one word: “breathtaking”.

Not that she was referring to the billionaire’s “America first” inaugural address, mind. While the rest of the world watched Washington, the German leader was opening a new museum in Potsdam, outside Berlin, showcasing dozens of paintings from Claude Monet to Gerhard Richter.

In her opening address, however, Dr Merkel warned there was a high price for “neglecting the value of freedom”.

“We experience this...when prejudices catch on, when nebulous claims are granted more credence than scientific facts, when space for factual discussion is lost,” she said. “Only when we live and defend these values that mean so much, only then do we keep them alive.”

Though Mr Trump, in the space of one interview last week, simultaneously praised and blasted Dr Merkel’s “catastrophic” refugee failure, she did not mention Mr Trump by name.

Asked how she would work with her third US president, the German leader suggested she would take her characteristic wait-and-see approach, and said “compromise can be found when there is a respectful exchange of views”.

On Sunday evening she sent out her chief-of-staff, Peter Altmaier, to remind Washington that her conditional post-election offer still stands of “good transatlantic politics on the basis of shared values”.

He said on Sunday that he had encountered a “broad range” of views “from people who have worked multilaterally...to those who formulate sentences like we heard” on Friday.“It will be interesting to see how that balances out,” he said.

A useful contribution, he added, would be for Nato members on this side of the Atlantic to meet their alliance spending obligations of 2 per cent of gross domestic product. “If Europe wants to talk eye-to-eye with the US then maybe it should do its security homework,” said Mr Spahn.

While Dr Merkel’s allies were controlled, her Social Democrat (SPD) coalition partners attacked Mr Trump’s inaugural speech that, to their and many German ears, struck a shockingly nationalist tone.

“We’re going to have to brace ourselves,” said Sigmar Gabriel, vice-chancellor and head of the centre-left SDP.

Amid anti-Trump marches in several German cities, Mr Gabriel joined 5,000 people on Saturday in the western city of Koblenz protesting against a meeting of European far-right political leaders.

Geert Wilders, whose Dutch party tops polls ahead of March parliamentary elections, said Europe was facing into a “patriotic spring”.

The Koblenz meeting, dismissed as a media stunt by German extremism analysts, has sparked tensions within the AfD leadership, many of whom stayed away because of the guest list.

AfD co-leader Frauke Petry, who spoke at the Koblenz event, said in 2015 that her organisation had “nothing in common” with Mrs Le Pen’s party.

Outside the gathering of around 800 far-right supporters, some 5,000 demonstrators sang along to Beethoven’s Ode to Joy, the European anthem, and waved placards reading: “Whoever sleeps through democracy awakes in a dictatorship.”