Trade tensions between US and China inevitable in next four years, warns state media 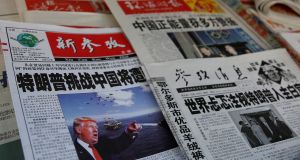 Newspapers in Shanghai on Saturday. The People’s Daily said punitive tariffs and labelling China a “currency manipulator” would lead only to retaliation. Photograph: Reuters

China was not mentioned by name in Donald Trump’s inaugural speech, but the message of impending tensions was clear from the subtext, and Chinese state media responded warily to the 45th US president’s arrival.

“Undoubtedly, the Trump administration will be igniting many ‘fires’ at its front door and around the world. Let’s wait and see when it will be China’s turn,” the state-owned Global Times, part of the stable that publishes the Communist Party’s official organ People’s Daily, said in an editorial.

And the newspaper was in no doubt that troubled times lay ahead for the world’s two biggest economies.

During the campaign, Mr Trump accused China of “raping” America with its cheap exports, and he has consistently and repeatedly attacked the country for currency manipulation, although he did not make good on his promise to officially name China as a currency manipulator on his first day in office.

While China is used to strong rhetoric in matters of trade and negotiation, Trump’s decision in December to accept a congratulatory call from Taiwanese president Tsai Ing-wen really raised hackles in the Beijing government.

China sees Ms Tsai as pushing for independence on the island, which has been self-ruled since the Nationalists fled there in 1949 after losing the Civil War. China sees Taiwan as sovereign territory that should be returned to the fold at some point, by force if necessary.

The Global Times commentary was comparatively reserved on this point.

“Although Mr Trump has spent a lot of time talking about China over the past year, his actual China policy has yet to take shape. Definitely, the Trump administration wants to boost exports to China and relocate factories from China back to the US. Taiwan will be merely a bargaining chip for them to put trade pressure on China,” it said.

An editorial from the Xinhua news agency carried in the People’s Daily focused on Mr Trump’s status as a business executive and urged pragmatism.

“As a renowned and savvy businessman, the new leader in Washington knows more than anyone else the merits of a sound China-US partnership,” it said. “Therefore, he surely knows that investment from Chinese businesses benefits the US economy and could help create more jobs for the country.”

Despite Mr Trump’s criticism that China is not doing enough to stop its ally North Korea from developing its nuclear programme, the People’s Daily said Mr Trump could not “find a more committed and ready partner with enough influence and resources than China”.

And it signed off with a warning tone, saying that slapping punitive tariffs on his country’s largest trading partner and labelling China a “currency manipulator” would lead only to retaliation.

“It is highly hoped that the Trump administration could take the interests of its country and the world as a whole into account, and start aiming for win-win co-operation with China as soon as possible,” the People’s Daily said.

And in a sign that it was business as usual in China regardless of Mr Trump’s inaugural weekend, the paper went on to say the People’s Liberation Army would carry out drills regardless of “foreign provocations and pressure”, insisting that naval exercises such as those conducted of late by the Liaoning, China’s only aircraft carrier, in the Strait of Taiwan, would become normal.