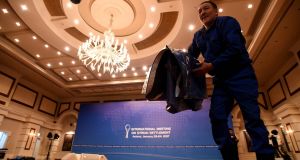 The opening of talks on Monday between Syrian government and insurgent representatives in the Kazakh capital, Astana, is the first direct encounter between Damascus and opposition fighters since the conflict began six years ago. If agreement on reinforcing the December 30th ceasefire is reached, UN-mediated political talks could be resumed in Geneva.

The transition from Astana to Geneva may have been eased by Syrian president Bashar al-Assad who said, “We are ready to negotiate everything, anything,” and by Turkish deputy prime minister Mehmet Simsek who stated: “Turkey can no longer insist on . . . a settlement without Assad.”

These statements indicate significant shifts in the stands of both Damascus, which had previously refused to discuss Mr Assad’s fate, and Ankara, which had argued there could be no peace while Assad remained in office. On this issue Ankara has moved toward Moscow and Tehran.

Sponsored by Russia, Turkey and Iran, the talks will be attended by teams led by Syria’s UN ambassador Bashar al-Jaafari; Saudi-sponsored Jaish al-Islam (Army of Islam) spokesman Mohamed Alloush and insurgent field commanders; UN envoy Staffan de Mistura; and diplomats from the EU, Britain and France. The Trump administration has also been invited to send experts and the Saudi-backed opposition Higher Negotiations Committee has dispatched political figures to advise the fighters.

The presence of Damascus’s allies Moscow and Tehran as well as Saudi and Turkish-backed insurgents demonstrates that both sides may, finally, be ready to negotiate seriously.

Mr Assad has said he would give amnesty to insurgents who lay down their arms but they are unlikely to agree at this juncture. While Damascus faces the dual challenges of insurrection and providing for Syrians living in government-held areas, insurgent war-weariness was suggested by Mr Alloush when he said “Astana is a process to end the blood-letting,” which he blamed on the regime.

The two main absentees have become spoilers. Al-Qaeda’s Jabhat Fatah al-Sham (formerly Jabhat al-Nusra) and the Islamic State, have been excluded as “terrorist” organisations. The Jabhat has launched attacks on on government forces in Wadi Barada, west of the Syrian capital, shutting down facilities at springs which provide 65 per cent of Damascus’s water supply.

Islamic State (also known as Isis) has destroyed iconic Roman relics in the ancient city of Palmyra and mounted an operation against government-held districts of Deir al-Zor, trapping the garrison and 110,000 civilians in the city and forcing the World Food Programme to suspend air drops of food and medical supplies.

At Turkey’s insistence, the US-supported Kurdish-dominated Syrian Democratic Forces have not been invited to Astana although their units control a wide swathe of territory in the north and are marching on Raqqa, the de facto Islamic State capital. The Kurds have accused Russia of “repeating the mistakes” of the Western countries managing the Geneva process. Ankara brands as “terrorist” the Democratic Forces, which is tied to Turkey’s rebel Kurdish Workers’ Party.

While the Kurds have said they will not abide by Astana decisions, they cannot be excluded once they capture Raqqa.

Former US Secretary of State John Kerry has said the parties involved in the Syrian war “understand that the dynamics have shifted” due to Russia’s entry into the conflict and are “reaching a state of near exhaustion . . . therefore there is a way to get an end game here.”