‘The rules of the game have changed with Trump’s arrival as president,’ city’s deputy mayor says 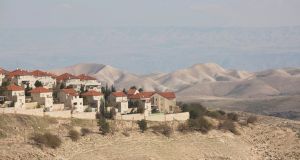 View of the Jewish settlement of Maale Adumim, near Jerusalem on Sunday. Photograph: Abir Sultan/ EPA

Israel has announced plans to build almost 600 new settlement homes in occupied east Jerusalem, just two days after Donald Trump’s inauguration as US president, with officials stating the “rules of the game have changed”.

The announcement by the Jerusalem municipality came as Israeli officials appeared emboldened by the new Trump administration, which has made clear its policies will be far more pro-Israel and settlements than Barack Obama’s.

Senior Palestinian officials immediately condemned the plans. They fear a Trump presidency could signal the death knell for their hopes of their own state as well as the end of the Oslo peace process.

The announcement came as Israel’s prime minister, Benjamin Netanyahu, said he would hold his first conversation with Mr Trump as president by telephone on Sunday.

“Many matters face us: the Israeli-Palestinian issue, the situation in Syria, the Iranian threat,” he said at the start of his weekly cabinet meeting.

Before the phone call, Mr Netanyahu reportedly told his ministers that he would tell Mr Trump he was willing to give Palestinians as “state minus” - suggesting a level of autonomy short of statehood.

The plans announced on Sunday had been on hold during the final months of the Obama administration, which had condemned each new announcement of settlement planning or construction as an obstacle to peace and the two-state solution.

A UN security council resolution demanding a halt to all Israeli settlements in the occupied territories passed in December after the Obama administration refused to veto it.

Some 430,000 Israeli settlers live in the West Bank and 200,000 Israelis live in east Jerusalem, which Palestinians see as the capital of their future state, in settlements long regarded by the international community as illegal.

Making clear that the approval of plans was linked to the arrival of the new administration in Washington, Jerusalem’s mayor, Nir Barkat, said: “We’ve been through eight tough years with Obama pressuring to freeze construction.

“Although the Jerusalem municipality has not frozen plans, many times we did not get government approval because of American pressure. I hope that era is over and we now we can build and develop Jerusalem for the welfare of its residents, Jews and Arabs alike.”

Meir Turgeman, the city’s deputy mayor and chairman of the Planning and Building committee, told Israel Radio that the permits had been held up until the end of the Obama administration.

“The rules of the game have changed with Donald Trump’s arrival as president,” he said. “We no longer have our hands tied as in the time of Barack Obama. Now we can finally build.”

The speed of the developments since Mr Trump’s inauguration - which many fear could increase tension and lead to new violence between Israelis and Palestinians - suggests a fundamental rewriting of the dynamic between Israel, Palestinians and Washington, which has long been seen as the key guarantor of the peace process.

It comes too as Mr Trump’s controversial pick for US ambassador to Israel, David Friedman - a pro-settlement hardliner- has reportedly insisted that he intends to live and work in Jerusalem not Tel Aviv, representing another potential flash point.

Nabil Abu Rudeineh, a spokesman for the Palestinian president, Mahmoud Abbas, condemned the plans and called on the UN to take action, particularly in light of the recent resolution.

“It is time to stop dealing with Israel as a state above the law,” he said.

US administrations have traditionally condemned all Israeli settlement plans as counterproductive.

The Israeli government is still contemplating how best to move forward in the early days of the Trump administration, with some calling for immediate action given Mr Trump’s perceived acquiescence and others calling for patience to work out a joint plan.

Israeli hardliners have been emboldened by Mr Trump’s election. The pro-settler Jewish Home party, a key member of the coalition, is pushing the government to support legislation that would annex Maale Adumim, a large settlement just outside of Jerusalem.

A Jewish Home official said on Sunday that Mr Netanyahu was pushing the party to put the legislation on hold, citing pressure from Mr Trump not to do anything hasty.

The official, speaking on condition of anonymity, said the party was skeptical that Mr Trump was really intervening and would push for a ministerial vote on the measure later in the day.

The official spoke on condition of anonymity because he was not authorised to discuss internal coalition deliberations with the media.

1 How one couple’s weekend away resulted in 30 Covid-19 cases
2 Taoiseach tells TD to ‘cop on’ over criticism of contact tracers asking about pubs
3 Coronavirus: 429 new cases as vigilance urged amid rises across the country
4 Miriam Lord: Government’s latest comedy of errors offers little to laugh about
5 North: 424 new cases of coronavirus in highest rate since start of pandemic
Real news has value SUBSCRIBE