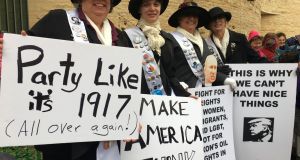 Andrea Beaty (55), her daughter and her two sisters, who travelled from North Carolina and California, were dressed in the purple and white of early 20th century Suffragettes to protest. 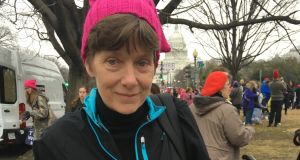 Carrie McKnight, from Virginia, who handed out pink hats to marchers in Washington, with a note and a hat sent from a Bobbi in New Mexico: “Dear Sister, thank you! Wish I could attend but this hat is my contribution.”

They came by car, bus, plane and train, from all corners of the country, to say that the America that sent Donald Trump to the White House is not the diverse, inclusive America they know and represent.

Daughters accompanying elderly parents in wheelchairs, girls carrying a kaleidoscope of signs with withering statements about Trump, mothers with young babies strapped in slings to their chests and, of course, fathers, brothers and sons jammed the broad avenues of Washington DC vowing to resist Trump.

All morning on Saturday, the train carriages on Washington’s Metro underground heaved with crowds heading into the city for the Women’s March on Washington. It was “an act of resistance” against the new Republican president, one of the organisers Tamika Mallory, a social justice activist, told the crowd.

More than 500,000, it is estimated, descended on Washington – followed by as many as four million more in cities and towns across the US and around the globe – to advocate for gender equality on Trump’s first full day in office, and to give voice to the minorities he disparaged during his presidential campaign.

The tide of Trump’s “Make America Great Again” red baseball caps that drifted up to the US Capitol for his inauguration on Friday had retreated and a sea of pink “pussy hats” with cat ears – a dig at the lewd remarks Trump once said on tape about women’s genitals – swept in on Saturday.

Before speaker after speaker delivered impassioned speeches from a stage, Carrie McKnight, from Reston, Virginia, was busy handing out the pink hats designed by Jayna Zweiman and Krista Suh in the Pussy Hat social media campaign. Women who could not attend, knitted hats and sent them for marchers.

McKnight held up a hat and a note sent from a Bobbi in New Mexico: “Dear Sister, thank you! Wish I could attend but this hat is my contribution.”

“We want to be seen,” McKnight told The Irish Times of the message she hopes the hats will send to Trump. “It is not about what you can’t do or what you haven’t done but what we can do.”

About 15,000 hats were posted to McKnight as the organiser of the project on the east coast.

“All the hats that came to my house, they weren’t about a political right or left,” she said. “It was about women’s issues and wanting people to understand that they are here and people need help with them.”

Marchers expressed alarm at Trump’s actions: his appointment of a few women, but mostly billionaire businessman and former Wall Street bankers to an oligarchic cabinet; his promise to nominate a conservative Supreme Court justice intent on rolling back abortion rights and a healthcare law that covers contraception; and his campaign rhetoric against women, people of colour and people with disabilities. They protested that he was not a legitimate president because he lost the popular vote and his election was helped by Russia.

Feminist author Gloria Steinem urged the demonstrators to unite and fight in the most dangerous times for women’s rights. “No more asking daddy. We are linked; we are not ranked,” she said. Filmmaker Michael Moore said he was at the march “to vow to end the Trump carnage”. Singer Madonna declared: “The revolution starts here: the fight for the right to be free, to be who we are, to be equal.”

These were sentiments shared by the women on the streets.

“There are many reasons to be marching but mostly at this point it is for our rights and the rights of my daughters,” said Stefanie Munsterman-Robinson who had travelled with her two children from Iowa.

Others had come from further afield. Tess Kilbane Myers drove for 16 hours straight from her home in New Orleans with a car full of women to join family members from Ohio at the march.

“It is like a salve for the next four years. It is such a statement to Trump: that you can’t hide from us and it isn’t just us, it is the rest of the world,” she said.

Trump had left for the afternoon, visiting the CIA headquarters in Virginia.

Andrea Beaty (55), her daughter and her two sisters, who travelled from Illinois, North Carolina and California, were dressed in the purple and white of early 20th century Suffragettes.

“Hopefully we will never have to go back that far, but I think women’s rights have taken a terrible hit,” said Beaty, a children’s author holding a sign that read: “Party like it’s 1917 (all over again)!”

“Our message is that he does not speak for us when he is misogynist, expressing Islamophobia, homophobia or any kind of views that we are somehow a separate group.

“And that we are loud,” she said, raising her voice as another cheer rippled through the massive crowd.

Trump did not acknowledge the noise around his new home or the march until a tweet on Sunday.

“Watched protests yesterday but was under the impression that we had just had an election!” he wrote. “Why didn’t these people vote? Celebs hurt cause badly.”