US president Donald Trump has walked back a suggestion to delay the US presidential election from November 3rd but has continued to assert that mail-in ballots will lead to "the most rigged election in history." Video: Reuters 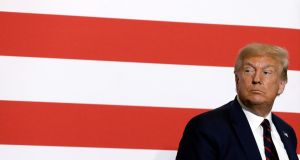 Donald Trump’s election comments came after gross domestic product figures revealed that the US is in the throes of the biggest economic slowdown since the 1940s. Photograph: EPA

Mr Trump predicted that the 2020 election would be “the most inaccurate and fraudulent election in history” and “a great embarrassment to the USA . . . Delay the election until people can properly, securely and safely vote”.

Timing of the US presidential election which takes place every four years is set out in statute and must take place on “the Tuesday next after the first Monday in the month of November”.

Moreover, the constitution states that Congress and not the president has the power to regulate elections and alter the date if necessary.

Mr Trump’s comments were made shortly after gross domestic product figures revealed that the US is in the throes of the biggest economic slowdown since the 1940s. Several recent polls also show Mr Trump trailing Joe Biden badly, the presumptive Democratic nominee in November’s election.

Senate majority leader Mitch McConnell dismissed the president’s suggestion. “Never in the history of the Congress, through wars, depressions and the civil war have we ever not had a federally scheduled election on time and we’ll find a way to do that again this November 3rd,” he said.

Trump ally, Republican senator Lindsey Graham, said while concerns about mail-in voting are valid, “delaying the election is not the right answer” .

Mr Trump’s comments come amid renewed focus on postal voting, which is expected to be more widely-used in November’s election than usual due to coronavirus.

While some states offer mail-in voting to all registered voters and have proven systems in place, other parts of the country lack the infrastructure and funding to expand their provision for postal ballots.

Earlier in the week Mr Trump seized on an isolated incident of election fraud in city council elections in New Jersey as evidence of voter fraud, though there is no evidence that postal voting is less safe than voting in person.

However, many authorities in states such as New York and Georgia have faced delays in implementing and counting postal votes, raising the possibility that the final result of the presidential election may not be known on the night of November 3rd.

Mr Trump’s intervention came as former president Barack Obama delivered a passionate defence of voting rights during his eulogy at the funeral of civil rights leader John Lewis in Atlanta.

“Even as we sit here, there are those in power who are doing their darndest to discourage people from voting by closing polling locations and targeting minorities and students with restrictive ID laws and attacking our voting rights with surgical precision,” said Mr Obama.

He said that every American, including former inmates, should be automatically registered to vote, extra polling stations should be added and election day should be made a national holiday.

In an unusually political speech from a former president, who has rarely commented on the actions of his successor in the White House, Mr Obama also referenced the recent deployment of federal agents to respond to protests in America’s streets.

“George Wallace may be gone,” he said, a reference to the infamous segregationist, “but we can witness our federal government sending agents to use tear gas and batons against peaceful demonstrators”.

Mr Trump has defended his deployment of federal personnel to cities, against the wishes of local officials, by arguing that federal property is coming under attack by “anarchists” and “agitators”.