Growing fears of crackdown as Zimbabwe prepares for protests 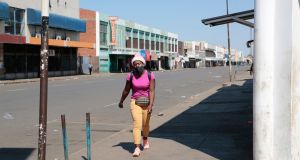 A woman walks on a deserted street in the central Harare, Zimbabwe, where there is a 6pm-6am curfew. Photograph: EPA/Aaron Ufumeli

There are growing fears in Zimbabwe that nationwide demonstrations called on Friday by ruling party critics who want the government to tackle corruption and poverty will lead to a violent crackdown.

On Wednesday the president, Emmerson Mnangagwa, told Zanu-PF party members that security forces would deal decisively with any attempt to destabilise his government, or create a health crisis, by breaching recently tightened coronavirus lockdown regulations.

Last week Mr Mnangagwa reintroduced a 6pm to 6am curfew and movement restrictions, citing the need to curb a recent surge in Covid-19 infections in the country, which stood at 2,879 confirmed cases on Wednesday.

However, those opposed to Mr Mnangagwa’s regime say he is using the Covid-19 lockdown to suppress opposition rather than to save lives.

On Monday Zanu-PF spokesman Patrick Chinamasa also called on party supporters to use “any means necessary” to deal with protesters, and accused US ambassador to Zimbabwe Brian Nichols of funding the demonstrations, calling him “a thug”.

Ms Mahere said Friday’s protests are a broad-based initiative that draws support from across Zimbabwean society, but she would not be drawn on the type of action that will be utilised on the day.

“There is a plan for peaceful protests in place, but we cannot say what will happen because we are dealing with a regime that has not hesitated to use violence in the past against citizens,” she said.

Since Mr Mnangagwa’s administration came to power in August 2018 in a disputed election, it has increasingly sought to suppress discontent with its handling of the economy, government corruption, and now the Covid-19 pandemic.

Post-election protests in 2018, and demonstrations over Zimbabwe’s depressed economy in January 2019, were met by brutal state crackdowns that left dozens of people dead and hundreds more injured, according to local NGOs.

After becoming president Mr Mnangagwa promised voters his government would break with the oppressive tactics used by his predecessor, Robert Mugabe.

However, critics say that abductions, intimidation and violence against opponents of Zanu-PF have increased since he took office, and worsened in the weeks leading up to Friday’s protests.

Prosecutors have accused the pair of inciting Zimbabweans to commit public violence by calling on them to support the July 31st demonstrations. Both men have been denied bail by the courts.

In addition, Zimbabwe’s security forces issued a statement on Monday asking the public for help to locate 14 prominent opposition politicians and union leaders who they believe are behind the protests, forcing most of them into hiding, said Ms Mahere.

On Thursday Reuters news agency reported that soldiers were patrolling the capital Harare ahead of the demonstrations, where they closed shops and cleared streets in the central business district.