Can Trump come back? 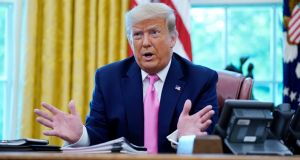 Donald Trump’s best chance of holding on to the US presidency is that Covid-19 does what he keeps suggesting, wistfully, that it might do, and simply go away. File photograph: Evan Vucci/AP

Here is what Donald Trump can realistically do to right his poll numbers, regain his lost supporters and make the 2020 presidential race close instead of a 10-point Joe Biden blowout.

(voice drops to a whisper)

The word “realistically” is crucial here. On paper, Trump is president of the United States, the most powerful man in the world, possessed of all the advantages of incumbency and all the powers of his office. In theory he could initiate, tomorrow, a new nationwide anti-Covid-19 effort aimed at full suppression of coronavirus, which if successful could have the economy running hot again by election day. In theory he could do many other things as well: barnstorm the country giving eloquent speeches on the American idea and racial reconciliation, launch a dozen clever policy gambits to wrong-foot the Democrats, cruise into Hong Kong’s harbour with a “Free Xinjiang” banner hanging from the presidential yacht.

But realistically one need only watch his Sunday interview with Chris Wallace to see that the president is still the man that he has spent his entire life becoming: a character out of CS Lewis’ The Great Divorce, in which the narrator visits a grey suburb of hell and finds it populated by souls who are self-imprisoned, incapable of freedom, their personalities reduced to grievances and grumbles. A couple of inhabitants go in search of Napoleon, who has “built himself a huge house all in the Empire style – rows of windows flaming with light,” and inside all he does is pace:

This is Trump as his first term as president concludes. At least 140,000 Americans are dead in a still-burning pandemic, the unemployment rate is 11 per cent, and when asked by Wallace how his presidency will be remembered, all he offered was the old pre-Covid litany of grievance, starting with “I think I was very unfairly treated” and continuing for paragraphs in the same self-pitying vein.

So let’s be real: There is no strategy that this president could adopt, no policy choice that he could make, no tweet of himself in a mask that he could issue, that would fundamentally alter his political position. Trump is incapable of normal presidential action, and even if his aides and handlers concocted such a strategy, the man in charge would make sure it would fail. A new suppression programme? A vision for economic recovery? Forget it. “It was the media’s fault. It was NeverTrump’s fault. It was Obama’s fault. It was the fault of Robert Mueller. It was the fault of Jeff Sessions . . . ”

But that doesn’t make his defeat inevitable. It only means that to speculate about a Trump comeback is to necessarily speculate about possibilities that are outside the president’s control.

Some of these possibilities are outside the realm of easy pundit extrapolation, too. (None of last year’s 2020 punditry predicted the pandemic.) But if we just stick with the two most important issues of the moment, coronavirus and the protests and unrest in American cities, we can imagine that Trump might benefit politically if the first gets suddenly better and the second gets much worse.

This president isn’t going to suppress the pandemic, so he needs it to do what he keeps suggesting, wistfully, that it might do, and simply go away. That’s unlikely, but it’s not quite impossible. Sweden, ground zero for the quest for herd immunity, has seen its caseload decline and its death rate fall without having reached the terrifying fatality rates that you would expect if the virus needed to infect 70 per cent of society before burning itself out. New York, our nightmare state three months ago, has partly reopened (and hosted major protests!) while keeping its death curve flat.

Both of these case studies are modest evidence for the theory that herd immunity for this virus starts to kick in once around 20 per cent of a population is infected, not 60 per cent or 70 per cent.

The Atlantic’s James Hamblin had a good write-up of these speculations recently: The idea is basically that if there’s a wide variation in susceptibility to a disease, and the sickness burns through most of the high-susceptibility targets in its first big sweep, subsequent sweeps will be much slower, and their case rates and death rates far lower than in a scenario where most people have roughly similar susceptibility. Which could – could – be what we’re seeing in New York and some of the formerly hardest-hit European countries now.

More likely, herd immunity is somewhere above 20 per cent and below 70 per cent, in the vast space between the most-hopeful and the worst-case possibilities.

But the 20 per cent scenario offers Trump’s best hope for an autumn comeback. It would mean that this summer’s surges need not be replicated in the fall, and that by the time election day arrives there could be a feeling of normalisation, a recovery of growth, even a safe reopening of schools, that right now seems altogether out of reach.

Note that I’m not saying this would save Trump, just that it would clearly help him on a scale far beyond anything he can do himself. At the very least it would help solve one of his leading political problems, which is that a certain number of Republican-leaning voters feel straightforwardly afraid to vote for him again, lest the US end up stuck in its current viral agony for months or years to come.

But then there still remains the difficulty that not enough Americans are afraid to vote for Joe Biden, notwithstanding the Trump campaign’s attempt to brand him as the candidate of Antifa. For this to change, the threat of crime and disorder would need to become much more palpable to the suburban voters who have abandoned Trump, so that he ceases to look like a goon overreacting to peaceful protests and begins to look like the hard man for hard times he imagines himself to be. And Biden, who right now doesn’t have to do much more than speak about race and crime in comforting platitudes, would need to find himself a bit more squeezed, between the activist wing of his party and the “racism is terrible but so is crime” voters who are giving him his current lead.

More violence is entirely possible, with the steady worsening of homicide rates in many cities probably a more important indicator than the mobs at statues or at Amazon stores. There is a lot of late-1960s naïveté at work in progressive politics right now, and the basic sympathy a majority of Americans feel for the protests and the Black Lives Matters movement might not survive a 1970s-style degradation of public safety.

But a degradation that happens fast enough to doom a candidate such as Biden seems even more unlikely than the “early herd immunity” possibility.

First, because the way Americans live now means that swing voters in the suburbs are a lot more buffered from urban crime than were white-ethnic swing voters in the 1970s, and the liberal gentrifiers who feel unsafe when crime spikes in Chicago or Washington DC are extremely unlikely to vote for any Republican, let alone for Trump.

Second, because Trump’s own overreactions, in Lafayette Park especially, have locked in an image of him as an instigator in his own right, an arsonist in the White House whose presence there can only make matters that much worse. Maybe there is a threshold of violence where this image changes and his instigation starts to look like necessary toughness. But it’s also possible that Trump’s incapacities now extend to an inability to ever look like the law-and-order candidate, no matter how many times he tweets the phrase.

Finally, because if Trump gets lucky and gets the first form of help he needs, the earlier-than-expected coronavirus herd immunity, it’s likely that the subsequent normalisation will have a calming effect on urban unrest, pulling people off the streets and turning down political temperatures at the moment when literal temperatures begin to fall as well. A scenario where the virus goes away but the suburbs feel more besieged than they do right now seems like one of the least likely combinations one could conjure.

So having set out to imagine two possibilities that could help make this a much closer race, at best I’ve imagined one and a half. Which doesn’t mean, again, that there aren’t other, wilder ones. But the exercise has clarified the limits of my own imagination: Even when I’m waxing speculative, I have a hard time imagining a plausible November in which Donald Trump can win. – New York Times