Patients tested around 10 weeks after recovery had lingering heart problems 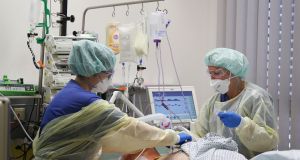 Medical staff care for a Covid-19 patient in the intensive care unit at the community hospital in Magdeburg, eastern Germany, on April 16th. Photograph: Ronny Hartmann/AFP via Getty Images

German researchers have flagged potential long-term health issues from Covid-19, identifying a pattern of heart problems among those who recovered from, and those who succumbed to, the novel coronavirus.

An observational study at Frankfurt’s university hospital of 100 patients with a recent Covid-19 infection, and no pre-existing medical conditions, revealed cardiac changes among 78 patients and heart muscle inflammation in 60 patients.

The patients were tested from April to June, on average 71 days after their recovery. Of them, some 33 patients had been severely ill and needed hospitalisation while two underwent mechanical ventilation.

Lingering problems among the patients ranged from signs of heart muscle inflammation and enlarged left ventricles to an impaired ability of the heart to pump blood to the rest of the body.

Many of these findings were consistent with patients having myocarditis, the study added, a condition which, in its severe form, can lead to heart failure or stroke, due to blood clots.

In 76 per cent of cases, the patient’s heart muscle contained detectable levels of troponin, a type of protein, which is considered another sign of heart damage. Some five patients had high levels of the protein, indicating serious heart problems.

A second test at Hamburg’s University Hospital was based on autopsies of 39 people who had died after having Covid-19. The patients’ median age was 85 years, and pneumonia was listed as the cause of death for 35 of the 39.

Nearly 62 per cent of the autopsies revealed evidence of the novel coronavirus within the myocardium or the middle, muscular layer of the heart. In five cases, the virus continued to replicate in the heart after the death of the patient.

Meanwhile, a third study has shown that one in five Germans hospitalised with coronavirus succumbed to the disease, a fatality rate that rose to 53 per cent for those who were placed on ventilators.

Berlin’s Technical University (TU), along with other research partners, examined the data of just over 10,000 patients admitted to 930 German hospitals between February 26th and April 19th.

Hospitalised male patients had a higher mortality rate than women, 25 per cent compared to 19 per cent.

Older patients were identified as more at risk; 27 per cent of patients in their 70s died while 38 per cent of those above 80 years old succumbed.

“These are important numbers to prepare for a second wave of the pandemic,” said Prof Reinhard Busse, a healthcare management specialist at the TU Berlin. Germany’s well-funded, decentralised healthcare system coped well with the first wave of Covid-19 and was able to ramp up quickly intensive care bed and virus-testing capacity.

However, the country’s leading disease control body has warned that public complacency is driving up infection rates again. On Thursday, some 900 new infections were registered in Germany within the previous 24 hours – up three times from infection rates a month ago.

1 Midlands lockdown: ‘Why shut down Offaly and leave Dublin open?’
2 Sand-hued cyclepaths changing the face of south Dublin coast
3 Meat plant clusters may be down to softly-softly approach
4 Inside the dog-trafficking trade: ‘After drugs, it’s guns, then pups’
5 Midlands lockdown: Movement restrictions in place for residents of Kildare, Laois and Offaly
Real news has value SUBSCRIBE