Maureen Dowd: Biden has his limitations but he’s no Trump

It’s the difference between fibs and whoppers, white lies and white supremacy 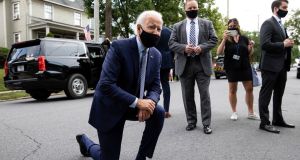 Joe Biden: Biden’s gaffes, logorrhoea, puffery and handsiness are part of the messy package that is Uncle Joe. So are his empathy, sentimentality and loyalty. Photograph: Christopher Dolan/The Times-Tribune via AP

“He plagiarised from me but he could never pull it off,” President Trump told reporters as he left Friday for a Florida fund-raiser. “He likes plagiarising.”

“Buy American” is a slogan that House Democrats have used for many years, so if anyone is swiping it, it’s Trump. And Joe and Bernie coming together on proposals is not plagiarism.

As to Kinnock, Kellyanne, I know a little something about that. That was my front-page Times story back in 1987. Biden, as he did on other occasions, got swept away with puffing himself up and sprinted over the factual line. He overidentified with aspects of Kinnock’s life in Wales – fusing their backgrounds – and borrowed some Celtic lyricism.

I wrote another story at the same time about Biden lifting chunks of Robert Kennedy speeches. But that was the fault of his speechwriter Pat Caddell, who sprinkled in RFK passages without Biden knowing.

Biden dropped out of the race. I ran into him on a back stairway in the Senate when he was getting ready for his news conference. We looked at each other but did not speak. I figured he’d never speak to me again.

I was wrong. One of his top aides yelled at me and told me I wouldn’t be allowed into Robert Bork’s Supreme Court confirmation hearings, which Biden was chairing. But Biden himself was friendly and fair to me afterward, even when I wrote pieces that were highly critical of the way he conducted the Anita Hill hearings and ripped on him for his hair plugs. He was so un-vengeful that I began to doubt he was really Irish. (His middle name is Robinette, after all.)

Biden has a talent for messes and has made some bad judgment calls – including voting to authorise the Iraq war.

But when David Axelrod told me that Barack Obama was leaning toward putting Biden on the ticket, I thought it was a fine idea. I felt that Obama made a mistake nudging him aside in 2016 – I think he would have beaten Trump.

Biden’s gaffes, logorrhoea, puffery and handsiness are part of the messy package that is Uncle Joe. So are his empathy, sentimentality and loyalty. Biden’s fabulist flights were an effort to make himself look better. Trump’s are more audacious – and dangerous. It’s the difference between fibs and whoppers, white lies and white supremacy.

Every day, Trump wakes up and constructs an alternative universe where his crowds are bigger, his poll results are better, the virus is evaporating, the testing is fantastic, it’s totally safe for kids to go back to school, and he’s doing the greatest job of any president in history.

“Toxic positivity,” the president’s niece Mary Trump calls it in her new family memoir, Too Much and Never Enough, which exposes the gruesome underbelly of the president’s gilded facade.

His father’s racism infected Donald, and the patriarch promoted a warped idea of manliness

Mary Trump is the daughter of the president’s older brother, Fred jnr, who died an alcoholic after a lifetime of his father’s abuse. With a PhD in clinical psychology, she diagnoses her Uncle Donald as a narcissist, of course, but also quite possibly having “antisocial personality disorder.”

“The country is now suffering from the same toxic positivity that my grandfather deployed specifically to drown out his ailing wife, torment his dying son, and damage past healing the psyche of his favourite child, Donald J Trump,” she concludes. The inability of the “court jester from Queens,” as Mary calls him, to succeed without being heavily subsidised by his father created a tension where he knew he was inadequate but could never admit it.

“At a very deep level,” Mary writes, “his bragging and false bravado are not directed at the audience in front of him but at his audience of one: his long-dead father.”

A Washington Post story a few days ago underscored her point that he is the same “desperate” little boy. The story recounted that Trump sees himself as a victim of the pandemic, and his mood is so “woe is me” that advisers tried to cheer him up with special events – “bringing 18-wheelers onto the White House South Lawn in mid-April or creating social media videos that feature throngs of his adoring fans.”

His father’s racism infected Donald, and the patriarch promoted a warped idea of manliness. Donald’s cracks about “ugly women” and his disrespectful behaviour in business were meant to make him look tough.

Fred jnr was destroyed by it. But Donald is trying to destroy us with it, with his absurd philosophy that masks are unmanly.

Biden, who assiduously stays masked, has never been a divider. Indeed, there were times, as with the Anita Hill hearings and the Iraq war vote, that he leaned too far into comity.

But Trump divides with feral pleasure.

“The atmosphere of division my grandfather created in the Trump family is the water in which Donald has always swum,” Mary Trump writes, “and division continues to benefit him at the expense of everybody else.” – New York Times