Lara Marlowe: Farewell Spike, the cat who shared my joys and sorrows for 20 years 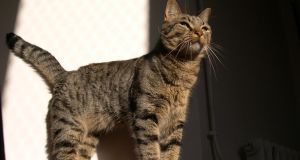 ‘I watched Spike agonise for 48 hours before his vet admitted the case was hopeless.’

Spike, the Irish cat in Paris, is no more.

I adopted Spike in Co Wicklow in late 2000, then took him to Paris, Washington and back to Paris.

My brave Irish cat died this week following a stroke, two months short of his 20th birthday, the equivalent of his late 90s in human years.

Spike’s passing was a reminder that ordinary grief, including pet grief, continues through the pandemic. I feared it might seem frivolous to write about the departure of a beloved pet when hundreds of thousands of people are dying from Covid-19. Their loss is, of course, infinitely more tragic.

But Spike was my cat, and I was his human. For two decades, he shared my joys and sorrows. If there is a cat heaven, I suspect Spike is regaling his fellow felines with tales of his earth-bound companion.

We sometimes annoyed each other, as when Spike demanded to be fed or brushed when I was on deadline. He brooded when I packed a suitcase. He found ingenious ways of punishing me for long absences.

But mostly, we showed each other kindness. I gave Spike my heating pad for his arthritis. He rewarded me by purring when I brushed him.

Spike remained an Irish cat. Unaffected, with innate warmth and a love of fun, he never succumbed to French snobbery or sophistication. I wrote about him in this newspaper, and was delighted when a stranger approached me on a Dublin street to ask, “How’s your cat?”

Every pet, like every human, has its own personality. Mary Fleming, a US novelist in Paris, suggests that pet grief is unique “because one’s feelings toward him or her are so pure, because the company has been so steady and devoted”.

Pet grief is doubtless shorter and less deep than people grief, but the symptoms are similar. Tears, confused numbness, the impression of a phantom presence. “Don’t be surprised if you think you see him at home,” my piano teacher, Françoise Legrand, warned.

It will take time to stop looking for Spike when I open the front door, to stop listening for his claws on the parquet floor. I keep finding traces of fur, and whiskers.

Years ago, Spike jumped to the top of the piano during my lesson, peered around the music stand and stared into my eyes. “There is no doubt,” Françoise laughed. “You are the love of his life.”

In old age, Spike begged to be lifted onto the piano bench, so Françoise could brush him while I played. Like Pavlov’s dog, he became conditioned. When we switched to virtual lessons via Skype during the coronavirus lockdown, Spike came running at the sound of Françoise’s voice, and was disappointed to find there was no one to brush him.

The older he grew, the more Spike wanted to be cuddled. During the lockdown, he was spoiled by my uninterrupted presence for 23 hours each day. I would have found the isolation lonely without him.

Spike inspected visitors to our apartment and was jealous of romantic attachments. He perfected a movie star amble and enjoyed making an entrance at an every dinner party. Guests rarely objected when he walked across the table, rubbing noses with a selected few. He twice singed his tail on lighted candles. A friend’s nine-year-old grandson nicknamed him Legendary Spike, after a video game brawler.

Movie of his life

I watched Spike agonise for 48 hours before his vet admitted the case was hopeless. She left me alone with him before the final injection. I stroked his tiger fur and re-ran the movie of his life, from mischievous, waddling kitten to lithe athlete with a wrestler’s shoulders to hunched old man with protruding bones and a dragging hind leg. A diplomat friend described him this week as “a gentleman cat, very dignified, elegant, and his own man, so to speak”.

After Spike died in my arms, the vet’s assistant asked if I would like her to curl him up “as if he were sleeping”. I signed a “convention de crémation” in triplicate. I will take his ashes to Ireland.

A pet’s life span is ill-matched to our own. They touch us as kittens and puppies, shift into fast motion, overtake us and age prematurely, a foretaste of our own decline.

Friends keep asking if I will adopt another cat. The thought of recruiting cat-sitters, the trouble and expense and certainty of future pet grief deterred me. But remembering Spike’s life, I realise that the joys outweighed the pain. So I’m storing his things, just in case.