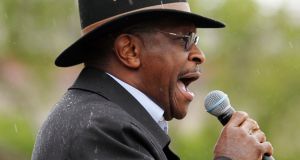 Herman Cain, the former presidential candidate and prominent Trump supporter, has died of coronavirus, the most high-profile US political figure to die of the disease.

His death was announced a month after he attended US president Donald Trump’s election rally in Tulsa, Oklahoma.

Cain (74), the former chief executive of Godfather’s Pizza, ran for the Republican nomination in 2012 but dropped out following sexual misconduct allegations, which he denied.

He went on to become one of Mr Trump’s most prominent black supporters. A cancer survivor, he was admitted to hospital in the Atlanta area about a month ago, more than a week after attending the Trump rally in Tulsa.

Mr Trump tweeted his condolences following a phone call with Mr Cain’s wife, daughter and son. “My friend Herman Cain, a Powerful Voice of Freedom and all that is good, passed away this morning. Herman had an incredible career and was adored by everyone that ever met him, especially me. He was a very special man, an American Patriot, and great friend,” adding that he and his wife Melania loved him. “Rest in Peace!”

Mr Cain’s death comes after Louie Gohmert, a Republican member of congress, tested positive for coronavirus this week. The development prompted House speaker Nancy Pelosi to order all congress members to wear a mask in the chamber and in the halls of Congress.

Mr Gohmert suggested that wearing a mask may have given him coronavirus. “It is interesting, and I don’t know about everybody, but when I have a mask on, I’m moving it to make it comfortable, and I can’t help but wonder if that puts some germs in the mask,” he said.

Amid growing concern about possible further outbreaks of coronavirus on Capitol Hill, discussions continued to take place between lawmakers on a new coronavirus stimulus Bill.

Millions of Americans are set to lose a weekly payment of $600, which is due to expire on Friday if a replacement Bill is not agreed. Republicans are arguing that the amount should be slashed to $200, a cut that Democrats oppose. The Democrat-controlled House of Representatives has already voted on a $3 trillion package, but the Republican-controlled Senate prefers a suite of financial supports equivalent to about $1 trillion. Even among the Republican majority there have been significant splits, with senators such as Ted Cruz strongly opposed to further government spending.

The race to agree some form of replacement stimulus package comes as new economic figures show GDP fell by 9.5 per cent in the second quarter, equating to an annual decline of 32.9 per cent – the steepest economic decline since the 1940s.

The coronavirus pandemic, which has claimed more than 150,000 lives in the US, has also caused economic havoc, with businesses closing and investment collapsing across the country.

“In the America John Lewis fought for, and the America I believe in, differences of opinion are inevitable and evidence of democracy in action,” he said to applause. “We the people, including congressmen and presidents, can have differing views on how to protect our union, while sharing the conviction that our nation, however flawed, is at heart a good and noble one.”