Trump and Comey: the most important questions

What was the the real reason for the FBI director’s sacking? 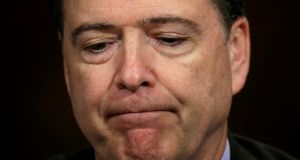 Why is Donald Trump’s sacking of the FBI director significant?
For only the second time in the FBI’s 109-year history, an FBI director has been fired by a sitting American president. Bill Clinton sacked William Sessions in 1993 after he refused to resign over an ethics scandal involving his use of FBI money. Although Richard Nixon famously fired the special prosecutor investigating the Watergate scandal, Archibald Cox, he did not dismiss the FBI chief. Trump’s decision to sack Mr Comey comes just months after he fired acting attorney general Sally Yates and Preet Bharara, the US attorney in Manhattan, though it is likely that both Yates and Bhrara may have been replaced by Trump eventually.

Why was Comey dismissed?
In his letter to Mr Comey, the US president said the FBI chief was “not able to effectively lead the bureau”. In a more detailed memo from deputy attorney general Rod Rosenstein to attorney general Jeff Sessions, released by the White House on Tuesday, Mr Rosenstein specifically cites Mr Comey’s handling of the Hillary Clinton email investigation as the reason for his dismissal.

The memo states that Mr Comey was “wrong to usurp the attorney general’s authority on July 5th, 2016, and his conclusion that the case should be closed without prosecution. It is not the function of the director to make such an announcement”.

In an unusual move, the memo cites opinions from a range of former Department of Justice officials from across the political divide, including former attorneys general and deputy attorneys general, that criticise Mr Comey’s behaviour.

What has this to do with Russia?
While the White House argues that the decision to dismiss Mr Comey, who has led the bureau since 2013, was solely connected to his handling of the Clinton email scandal, Democrats and many Republicans have reacted with alarm to the timing of the move, as Comey is also leading an FBI investigation into links between the Trump campaign team and Russia.

Democrats have said they simply do not believe that the president was motivated to move against the FBI director because of the email scandal. Just last week Mr Trump appeared to praise Mr Comey in a tweet: “FBI director Comey was the best thing that ever happened to Hillary Clinton.”

While White House counsellor Kellyanne Conway insisted that the decision was about restoring trust in the FBI and had “nothing to do with Russia”, Mr Trump has himself muddied the waters by bringing the Russian issue into the controversy. In his letter to Mr Comey he specifically mentions the Russian investigation, despite repeated assurances by the White House that the decision to fire the FBI chief is unconnected to Russia.

“While I greatly appreciate you informing me, on three separate occasions, that I am not under investigation, I nevertheless concur with the judgment of the Department of Justice that you are not able to effectively lead the bureau,” Mr Trump wrote in his letter.

Was the decision to sack Comey politically motivated?
The timing of the decision has raised alarm bells. The Trump administration knew about the Comey email controversy 10 months ago, so questions have been asked about why it moved now, although Mr Comey’s appearance at a Senate committee last week, in which he publicly discussed his handling of the email controversy for the first time, may be one justification.

Uncertainty surrounds the role of deputy attorney general Rod Rosenstein, a respected prosecutor who was sworn in by the Senate in March and took up his job two weeks ago. He is overseeing all investigations into Russia after attorney general Sessions recused himself, having failed to disclose meetings with the Russian ambassador. The White House says Mr Rosenstein independently came to his conclusion about Mr Comey, although others have claimed he was instructed to investigate the issue by the president.

Mr Trump’s own views on the former FBI director are contradictory. He repeatedly praised Mr Comey for his actions in the Hillary Clinton email scandal, Mr Comey is the man investigating the Trump campaign’s links with Russia. Mr Comey also publicly discredited claims by Trump that he had been wire-tapped by former president Barack Obama. There have also been reportedly tensions between the White House and the FBI over the agency’s apparent failure to prioritise an investigation of leaks to the media over the Russian investigation.

In recent days, there have been signs that the various Russian investigations were gathering steam; Trump critics say this was the likely reason he acted. A grand jury in Virginia issued subpoenas for records from associates of former national security adviser Michael Flynn in recent weeks. Mr Comey was also due to give closed-door testimony to the Senate on Thursday.

While officials have stressed that the FBI investigation will continue despite the removal of Mr Comey, all eyes will now be on his successor, with former New York mayor Rudy Giuliani and New Jersey governor Chris Christie among the names being touted. In the interim, Mr Comey’s deputy, Andrew McCabe, will lead the agency.