Anti-missile system exposes tension between US and South Korea 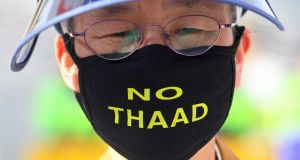 A South Korean protester during a rally against the Thaad system. Photograph: Jung Yeon-Je/AFP/Getty Images

A new documentary, The Blue Butterfly Effect, exposes the tensions in the South Korea-US relationship by showing local opposition to the installation of an anti-missile system to counter North Korea’s growing nuclear threat.

During the presidential election campaign, the planned installation of the Terminal High-Altitude Area Defence (Thaad) system – an anti-ballistic missile system – on a golf course in Seongju, 300km southeast of Seoul, became a factor because the eventual winner, Moon Jae-in, said the decision was taken too hastily.

Moon said the decision shouldn’t have been taken during the interim administration following the impeachment of his predecessor, Park Geun-hye, and he has said he would review the installation.

Director Emmanuel Park Moon-chil said that initially there were health concerns about electromagnetic radiation from the radar in an area famous for its crop of Korean melons.

“But later on, as the movement evolved, the residents learned a lot more about the geopolitical effects of this weapon and they were concerned it would hit the balance in the region and raise diplomatic and military friction. They were worried it might cause war and that the region could be targeted,” said Park.

The facility is being sited on a golf course owned by the Lotte conglomerate in a land-swap deal. The company’s decision has devastated its business in China, with Chinese authorities ordering Lotte to close its supermarkets in the country.

China believes Thaad will be used strategically against its missiles and has imposed restrictions on tour groups heading to South Korea.

South Korea and the United States fought side by side in the Korean War (1950-1953) and their relationship has always been strong, with the US contributing heavily to South Korea’s security.

However, the row over the deployment of Thaad has highlighted just how challenging the relationship is, as South Korea tries to assert sovereignty while keeping an eye on the increasingly warlike pronouncements from Pyongyang.

Under Donald Trump the relationship has changed, and Koreans are sceptical about the American president’s demand for a $1 billion (€920 million) contribution towards the operational costs for Thaad, as well as drastic changes to trade terms for the country.

“The residents in Seongju believe that only Japan and the US would benefit from the system. The chance of the North shooting a missile at the South is very, very low. It wouldn’t be a high-altitude missile, it’s more likely to be a low-altitude, Scud-like missile,” said Park, whose film this month took the documentary prize at the Jeonju International Film Festival.

The anti-missile system will be an early test of Moon’s leadership. Anti-American sentiment has risen in Seongju as the system is installed, and people are asking if the treasured US-South Korea alliance is real.

“The residents feel it is a unilateral decision favouring the US and Japan, whereas Korea is bearing the brunt of the retaliation from China and Russia, ” said Park.

“Prior to the Thaad deployment a lot of residents thought the US really was our ally and looking after our interests. But after seeing their attitude to this whole issue, a lot of them don’t regard the US as a true ally. Residents feel that South Korea is being used as a pawn in escalating tensions between China and the US,” said Park.