Thousands of lizards stop controversial rail project in its tracks 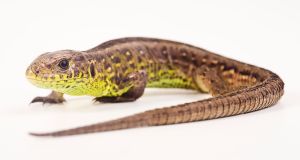 The lizards – which include sand lizards – are considered threatened species in Europe. Photograph: Alfred Schauhuber/McPhoto/ullstein bild via Getty Images

A multibillion-euro railway development project in southern Germany, which has already been waylaid by spiralling costs and rows over environmental concerns and viability, is facing its latest challenge – from two threatened species of lizard.

Thousands of sand and wall lizards have been found along the route of the project, known as Stuttgart 21.

A major upgrade of Stuttgart’s central station, it is part of 56km of new lines for the trans-European rail network.

Deutsche Bahn, one of the main players behind the project, has estimated the cost of resettling the reptiles at around €15 million. The rail company says it has budgeted between €2,000 and €4,000 per creature.

The lizards in question are considered threatened species in Europe. They include a small group of sand lizards (a sexually dimorphic reptile with eye-shaped markings that lounges on rocks and sleeps in holes) as well as several thousand wall lizards (a small brown-grey reptile that is typically found on walls and stones).

The lizards were found on a construction site for an Intercity Express line between Stuttgart and Ulm. Their discovery, and the resulting battle between conservationists and constructors over how to deal with them, has already delayed the project by 18 months, according to a project spokesman.

To resettle the lizards, experts are being brought in to catch them in nets. The reptiles are then to be transported six miles to a new home in Untertürkheim.

The costs involved cover the rescue teams, transporting the lizards, planning their new habitats and monitoring their wellbeing.

Animal rights campaigners have said the high cost is a result of Deutsche Bahn failing to address the issue sooner. The presence of the lizards has reportedly been known since March 2015.

“If you deal with these issues as and when they arise, then protecting species (like these) doesn’t have to be so expensive,” Johannes Enssle, head of the nature protection association Nabu, told German media.

Stuttgart 21 has been beset by problems and delays, as well as sparking huge public demonstrations. The project was officially announced in 1994, when it was estimated it would cost €2.46 billion, but work did not begin until 2010. It is expected to start operating in 2021, and the estimated construction costs at the end of 2016 stood at between €6.3 billion and €10 billion.