Trump and Comey: Abrupt end after year of living dangerously 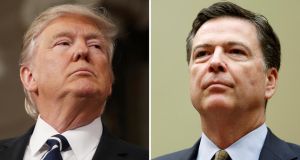 President Donald Trump’s decision on Tuesday to fire James Comey, the FBI director who had been leading an investigation into possible ties between Mr Trump’s campaign and Russia, came in a bombshell announcement that left Washington reeling.

But it had been a long time in coming. Whatever the stated reasons, Mr Comey’s sacking was the abrupt culmination of a toxic dynamic between him and Mr Trump that had unfolded slowly over more than a year.

The relationship began to sour during the presidential campaign over Mr Comey’s exoneration of Hillary Clinton in the FBI’s investigation of her email practices, which ran counter to Trump’s “Lock her up” message to his supporters. It grew still more bitter after Trump became president and Comey declined to back up his accusation that President Barack Obama had spied on him. And it reached a nadir when the FBI director confirmed in sworn testimony in Congress that the bureau was investigating ties between Trump’s campaign team and Russia.

Administration aides said on Tuesday that senior officials at the White House and the Justice Department had been charged with building a case to justify Mr Comey’s firing since at least last week, and that Attorney General Jeff Sessions had been charged with coming up with reasons to fire him.

That rationale, set forth in a pair of letters from Mr Sessions and Rod J Rosenstein, the deputy attorney general, was that Comey had mishandled the Clinton emails investigation by, among other things, releasing “derogatory information” about her as he closed the case and said she should not be prosecuted. But that explanation ran counter to Mr Trump’s message as recently as last week: that Mr Comey had treated Ms Clinton too well, not too harshly, during the investigation.

“FBI director Comey was the best thing that ever happened to Hillary Clinton in that he gave her a free pass for many bad deeds!” Trump wrote on Twitter last week. Comey’s dismissal comes after a period in which the president has engaged in a remarkably public effort to undercut an active investigation into his presidential campaign, repeatedly denouncing the inquiry and dismissing it as meritless. “The Russia-Trump collusion story is a total hoax,” Mr Trump said on Twitter on Monday. “When will this taxpayer funded charade end?” But the final straw appeared to be Comey’s appearance last week at a Capitol Hill hearing, during which he testified that while he was “mildly nauseous” to think he might have influenced the outcome of the presidential election, he had no regrets about his handling of the Clinton emails investigation.

The ill will dates from last summer, when the FBI director took the extraordinary step of going public in the thick of the presidential campaign, with his conclusion that Clinton could not be prosecuted for her use of a private email server to handle classified documents.

Mr Trump told aides at the time that Ms Clinton should have been charged, according to one person close to him who spoke on the condition of anonymity without authorisation to speak for the president. That was a view Mr Trump often shared with voters on the campaign trail.

“He saved Hillary Clinton from facing justice for her illegal and corrupt actions,” he said of Mr Comey at a rally in Tampa, Florida, the following month. “They were illegal and they were corrupt, and the FBI saved her, and I would imagine many people within the FBI are extremely embarrassed – extremely.”

But as election day neared and MR Comey went public again – this time alerting Congress that new emails had come to light in the Clinton matter – Mr Trump said his opinion of Mr Comey had improved. “I have to tell you, I respect the fact that Director Comey was able to come back after what he did,” Mr Trump said in Phoenix in October. “I respect that very much.” In Grand Rapids, Michigan, Mr Trump said, “It took guts for Director Comey to make the move that he made in light of the kind of opposition he had.”

“I was not his fan,” he said at the time, “but I’ll tell you what: What he did, he brought back his reputation. He brought it back.”

Still, after his victory in November, Mr Trump was irate with the suggestion, put forth by many Democrats and ultimately Ms Clinton herself, that he would not have won but for Mr Comey’s actions. He ultimately had to be persuaded to keep the FBI director, the person close to him added. Even then, the president made it clear he could change his mind at any moment.

In November, Mr Trump suggested in an interview with CBS’s 60 Minutes that Mr Comey’s fate could hinge on whether he was able to satisfy the president that his handling of the Clinton investigation had been justified. “I would certainly like to talk to him and see him” before making a decision about whether to keep Mr Comey, the president said then. “This is a tough time for him, and I would like to talk to him before I’d answer a question like that.” He added, “I’d want to see, you know, he may have had very good reasons for doing what he did.”

Mr Trump’s disdain for Mr Comey intensified at the beginning of March, when the president wrote Twitter posts accusing Barack Obama of wiretapping his telephone at Trump Tower. The next morning, word spread quickly that Comey wanted the Justice Department to issue a statement saying that he had no evidence to support the president’s accusation, although no such statement was released. For weeks afterwards, the president insisted that his accusation was correct. In dramatic testimony later in March, Mr Comey said he had no information to back up the president’s allegations even as he confirmed the existence of an FBI investigation into Mr Trump’s campaign.

That set up a remarkable dynamic – an FBI director directly contradicting a sitting president at the same time the bureau was pursuing a possible criminal investigation into whether the president’s associates had colluded with Moscow to tilt the election to Mr Trump.

Last month, the president reiterated that Mr Comey might not be on solid ground, telling Fox News that “it’s not too late” to fire him, even as he said he had confidence in his FBI director. “We’ll see what happens; it’s going to be interesting,” Mr Trump told Fox. “Don’t forget, when Jim Comey came out, he saved Hillary Clinton – people don’t realise that. He saved her life.”