Six years on from protests, inequality remains rife and freedom of speech is muzzled 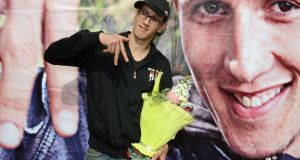 The Moroccan rapper known as El Haqed is used to controversy but this was provocative even by his standards. In his new video, Raka Taka, which was released on April 21st, he sets light to his passport and watches the document burn as he delivers a volley of angry rhymes at the Moroccan regime.

“Why are you accusing me of plotting and taking me from one prison to another?” he raps. “If you are accused, whatever happens, you remain accused.”

El Haqed, a name that translates as “The Enraged One”, lives in exile in Belgium having been hounded out of his native country for his outspoken music and views. His real name is Mouad Belrhouate and since the Arab Spring he has become one of north Africa’s best-known and politically active rappers.

The video drew a predictably outraged response, with one online comment describing him as a “stupid lost confused thug”. Another delivered similar abuse, adding that “Morocco is a democratic country, the king is a good leader”.

The career of the 29-year-old El Haqed has been dedicated to giving a very different view of his country and its monarch.

“In my songs I criticise the authorities – the king, the police – and I talk about our lives as they really are,” he tells this reporter via email.

Six years on from the turmoil of 2011, he is one of many hip-hop performers who are both appalled and inspired by Morocco’s social challenges and the heavy-handed behaviour of the country’s authorities.

“Rap comes from the street,” El Haqed says. “It’s very direct and rappers can voice what people are thinking but can’t say aloud.”

Morocco’s Arab Spring was atypical. The country saw a wave of social unrest as protesters demanded more rights, transparency and democracy, led by the loosely organised February 20th movement. But whereas in neighbouring nations such as Egypt and Tunisia the turmoil led to regime change, Morocco’s King Mohammed VI, who has been on the throne since 1999, successfully defused the tensions by promising constitutional reform.

However, many of those in the February 20th movement were deeply disappointed, firstly when it emerged that those drawing up the new constitution were hand-picked by the regime, and then when the timid nature of the reforms was revealed.

“The king is still president of everything – he manages religion, the economy, he decides everything,” says Abderrazzak Boughanbour, president of the Moroccan Human Rights League, speaking in his organisation’s small offices in Rabat. “Democracy can’t work in this constitutional framework and there is no separation of powers.”

It’s a commonly expressed view, and Boughanbour and many others complain that the Moroccan regime, or Makhzen as it is commonly known, has tracked back on its 2011 promises, clamping down on human-rights activists and other perceived troublemakers. Many face an indirect form of repression. Boughanbour’s organisation, for example, struggles to get permits to stage events and is snubbed by the state-controlled media, while other activists complain of being harassed by the security forces and facing trumped up legal charges for nonexistent crimes.

Even some of those close to the regime appear to be worried by the turn of events over the past half-decade. “There is a real concern because some influential people in the state want to return to the era before the Arab Spring,” says Abdelali Hammidine, a senior figure in the Islamist Justice and Development Party, which has governed under the king’s supervision since 2011.

But El Haqed, who was deeply involved in the Arab Spring protests and whose music was part of their soundtrack, has suffered directly, being jailed three times since 2011. On one occasion, he was arrested after somebody else posted a video with donkeys’ heads superimposed on policemen to accompany his song Police Dogs.

“Getting involved in the February 20th movement was like a school for me, and so was prison,” says the rapper. Instead of breaking him, jail strengthened his determination to speak out about Morocco’s flawed democracy, he says.

Others have followed in El Haqed’s bold footsteps. A rapper known as Mr Crazy was jailed for three months in 2014, when he was 17, for offences related to his lyrics, although he has since stopped performing overtly politicised music.

“There are rappers who say things which are true and then there are those who rap just because it sounds nice, to be well-received,” says Reda Shyller, a hip hop producer from the Rabat area who also manages a stable of Morocco’s top rappers. He nonetheless believes that in Morocco, where youth unemployment and social inequality are rife, it’s hard for rappers to ignore what is surrounding them.

“Rap is political by default,” he says. “Rappers’ songs are automatically influenced by where they live.”

The challenge for politically engaged rappers in contemporary Morocco, Shyller says, is to avoid the fate of the likes of El Haqed and Mr Crazy by taking aim at society’s problems without falling into the trap of being too specific and incurring the wrath of the Makhzen.

In Salé, a town just outside Rabat, I meets Mehdi Lyoubi, one of the rising stars of Moroccan hip hop, better known as Mehdi Black Wind. He is a solo artist and member of the celebrated rap collective L’Bassline. Like virtually all of his peers his music has been heavily influenced by American hip hop. But having come of age during the Arab Spring and been politically awakened by his university studies, he says Morocco’s social injustice is what informs his lyrics.

“In my songs I can’t avoid speaking about the political situation, about freedom of speech and human rights,” says Lyoubi, a shy, handsome 24-year-old. “Historically, artists have always played an important role in public debate about the situation in a given country and rap is an art form.”

His song Nashid II, for example, skilfully criticises King Mohammed VI for failing to tackle poverty adequately, without being quite as blunt as El Haqed.

“As a human being I don’t want to go to prison, so as an artist I have to make sure I avoid insulting people directly in my songs,” he says.

Six years on from the Arab Spring, the February 20th movement appears to be in disarray and many activists are disheartened by the regime’s determination to muzzle dissent. Yet discontent still simmers in Morocco, as a series of protests demonstrated recently in the northern Rif region. And rap, meanwhile, continues to give voice to the challenges that a generation of young Moroccans are facing each day.