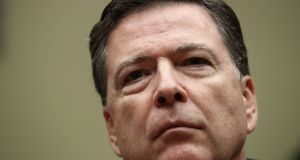 The head of the FBI, James Comey, has been fired by US president Donald Trump in a move that has taken politicians on both sides of the divide by surprise.

Mr Comey’s firing comes days after he testified on Capitol Hill about the FBI’s investigation into Russia’s election-meddling and possible connections between Russia and Mr Trump’s campaign.

In a letter to Mr Comey, Mr Trump said the spy chief was “not able to effectively lead the bureau.

“It is essential that we find new leadership for the FBI that restores public trust and confidence in its vital law-enforcement mission.”

It is understood that Mr Comey was dismissed over issues going back to July 2016.

This is the period when Mr Comey announced an investigation into then Democratic presidential candidate Hillary Clinton’s email server, an intervention Mrs Clinton claims swayed the election in her rival’s favour.

But Mr Comey is also leading an investigation into links between the Trump campaign team and Russia during last year’s presidential election.

In the letter, Mr Trump writes: “While I greatly appreciate you informing me, on three separate occasions, that I am not under investigation, I nevertheless concur with the judgment of the department of justice that you are not able to effectively lead the bureau.”

A number of senior Democrats subsequently called for a special prosecutor to be appointed to oversee the investigation into alleged links between the Trump administration and Russia.

The dramatic development – which is understood to have taken FBI officials by surprise – came hours after reports claimed that Mr Comey gave inaccurate testimony to a Senate committee last week over Mrs Clinton’s use of her email server while secretary of state.

But reports on Tuesday suggested that Ms Abedin only occasionally sent emails, prompting expectations that the FBI would move to correct the record.