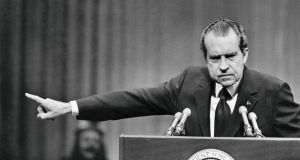 In dramatically casting aside FBI director James Comey, US president Donald Trump fired the man who may have helped make him president – and the man who potentially most threatened the future of his presidency.

Not since Watergate has a president dismissed the person leading an investigation bearing down on him, and Trump’s decision late Tuesday afternoon drew instant comparisons to the “Saturday Night Massacre” when President Richard Nixon ordered the firing of Archibald Cox, the special prosecutor looking into the so-called third-rate burglary that would eventually bring Nixon down.

When Cox, the special prosecutor, subpoenaed Nixon for copies of White House tapes, the president ordered that he be fired. Both attorney general Elliot Richardson and his deputy, William Ruckelshaus, refused and resigned instead. The third-ranking justice department official, solicitor general Robert Bork, complied with Nixon’s order and fired Cox.

Democrats saw parallels. “This is Nixonian,” senator Bob Casey, a Democrat, said in a statement.

“Not since Watergate have our legal systems been so threatened and our faith in the independence and integrity of those systems so shaken,” added senator Richard Blumenthal, a Connecticut Democrat.

Even a long-standing ally of Trump’s, Roger Stone, drew a connection as he defended the president. “Somewhere Dick Nixon is smiling,” Stone, who worked for Nixon and is among the Trump associates facing FBI scrutiny, said in an interview. “Comey’s credibility was shot. The irony is that Trump watched him talk about bumbling the Hillary investigation, not the Russia investigation – and decided it was time to get rid of him.”

At least one Twitter user made the argument that Trump had gone where even Nixon had not. The Nixon presidential library posted a picture of Nixon on the telephone with the message: “FUN FACT: President Nixon never fired the Director of the FBI #FBIDirector #notNixonian.”

Ever since Watergate, presidents have been reluctant to take on FBI directors, no matter how frustrated they were. The only exception was President Bill Clinton, who fired William Sessions in 1993 after ethical issues were raised against him, and was accused of acting politically. The successor he appointed, Louis Freeh, became even more of a headache for Clinton as he helped independent counsel Kenneth Starr investigate the president. But Clinton never risked the political backlash that would have come had he dismissed Freeh.

Robert Mueller III threatened to resign as FBI director during President George W Bush’s administration if a secret surveillance programme he considered illegal were continued, and Bush backed down rather than risk the scandal that would have ensued. Joining Mueller in that threat, as it happened, was a deputy attorney general named James Comey. Bush ultimately revised the legal justification in a way that passed muster with Mueller and Comey and allowed the surveillance to go forward.

Timothy Naftali, a former director of the Richard Nixon presidential library, said Trump’s dismissal of Comey was not a direct parallel to the Saturday Night Massacre because he was not appointed specifically to investigate the 2016 campaign.

“With or without Mr Comey, the FBI will continue to investigate the 2016 campaign as it relates to Russian intervention,” Naftali said. “This is another kind of mistake. Unless attorney general [Jeff] Sessions can prove malfeasance or gross negligence by Comey, the timing of this action further deepens suspicions that President Trump is covering up something.”