US to arm Kurdish fighters in Syria for Raqqa offensive 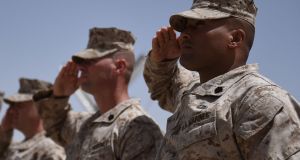 US marines in the Afghan province of Helmand. The Trump administration is reported to be considering a troop surge in the country. File photograph: Wakil Kohsar/AFP/Getty

The United States is to arm Kurdish fighters in Syria in a bid to retake the city of Raqqa, a move that is likely to alarm Turkey.

President Donald Trump signed off on the plan late yesterday, the Pentagon said, the latest stage in the United States’ long-term strategy to try and capture Islamic State’s defacto capital.

Turkey, a key Nato ally of the US, sees the group of Kurdish fighters known as the YPG as adversaries in the region, but Washington believes they can play a key role in the defeat of Islamic State.

The move comes as the US was said to be mulling sending more troops to Afghanistan in a move that would mark a major departure from former president Barack Obama’s pledge to withdraw US troops from the 16-year-long conflict.

A decision to send up to 3,000 more troops is likely to be made ahead of Mr Trump’s planned visit to Nato on May 25th in Brussels, according to media reports.

While White House press secretary Sean Spicer said yesterday that “no decision has been made” on the next steps forward for the US in Afghanistan, he confirmed that a major strategic review of US policy in Afghanistan was under way.

Approximately 8,400 US troops are stationed in Afghanistan, down from a high of 100,000. Mr Obama pledged to take all US personnel out of the war-torn country, an objective that ultimately failed.

Last month, the Trump administration took the international community by surprise when it dropped the US military’s largest non-nuclear bomb – commonly known as the “mother of all bombs” – in a remote region of eastern Afghanistan, targeting Islamic State.

US troops are stationed alongside other Nato allies in the country and the issue is likely to dominate a Nato summit in just over two weeks’ time in Brussels which will be attended by Mr Trump as part of a week-long visit to Saudi Arabia, Israel, Italy and Belgium.

Asked if sending more troops to Afghanistan would do anything to help the conflict, Mr Spicer said that it was not a question of simply sending more people, but rather about rethinking strategy.

“How do we win, how do we eliminate the threat? Doing that is not just a question of throwing money or people,” he said, adding that the aim of the US is to “eliminate the threats to our national security”, particularly from Islamic State and the Taliban as well as al-Qaeda.

Mr Comey told the committee that Mrs Clinton’s aide Huma Abedin had a “regular practice” of forwarding classified emails to her ex-husband, disgraced former congressman Anthony Weiner, for him to print out. During the testimony he also said that she had forwarded “hundreds and thousands of emails, some of which contain classified information”.

But with reports yesterday suggesting that Ms Abedin only occasionally sent emails, there were expectations that the FBI would move to correct the record. Mrs Clinton last week blamed Mr Comey’s announcement of a fresh investigation into her use of an email server in the final weeks of the presidential campaign for her election defeat.

Ms Yates, who was fired by Mr Trump on January 30th, relayed her concerns to White House counsel on January 26th and 27th, but Mr Trump did not fire Mr Flynn until February 14th.

Speaking yesterday, Mr Spicer described Ms Yates’s intervention simply as a “heads-up”, noting that the White House did not have access to all necessary information until a week after the January 26th meeting.