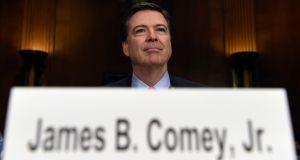 FBI director James Comey. ‘The key point is that Trump has fired the man investigating him.’ File photograph: Susan Walsh/AP

It took Richard Nixon five months to fire the man investigating him. It took Donald Trump less than four. The difference is that Nixon did little to conceal his motive – to save his presidency. Trump, on the other hand, says he fired James Comey for having mishandled last year’s email investigation into Hillary Clinton. Even by Trump’s standards, this stretches credulity. Trump is asking the US public to believe he “terminated and removed” the FBI director for having treated Clinton unfairly. This was the same opponent whom Trump said should be locked up for mishandling her emails. Now, apparently, Clinton was the victim of an unprofessional investigation and Trump is setting things straight.

Comey’s firing was ostensibly prompted by the revelation that he had misdescribed his decision last October to reopen the Clinton email investigation – a move that many believe tipped the election in Trump’s favour. Yet Comey, who until Tuesday night was overseeing the investigation into the Trump campaign’s alleged collusion with Russia to influence last year’s election, only disclosed his misstatement this week. Trump, on the other hand, was cavilling at the FBI director long before Comey’s disclosure. Last week Trump tweeted: “FBI Director Comey was the best thing that ever happened to Hillary Clinton in that he gave her a free pass for many bad deeds!” Comey, in other words, was already in Trump’s sights.

The implications are dramatic. Like any US federal scandal, the details mount but the basics remain simple. Having fired the head of the only Russia investigation taking place within the executive branch, Trump will now conduct a search for Comey’s replacement. What are the chances he selects an independent figure who will pick up the Russia investigation where Comey left off? What are the odds Trump’s FBI nominee gets the necessary 50 votes for Senate confirmation? Trump will be aided in his search by Jeff Sessions, the attorney-general, who was forced to recuse himself from overseeing Comey’s investigation because of his undisclosed contacts with the Russian ambassador. This was the same ambassador with whom Michael Flynn, Trump’s first national security adviser, held conversations secretly recorded by the FBI. The leaked contents of those, in turn, led to Flynn’s firing.

These are just the outlines. The key point is that Trump has fired the man investigating him. Nixon’s “Saturday night massacre” in which he fired Archibald Cox, the special prosecutor, is the only precedent.

FBI Director Comey was the best thing that ever happened to Hillary Clinton in that he gave her a free pass for many bad deeds! The phony...

There are three consequences. The first is that calls will mount to appoint a special prosecutor to take over the Russia investigation. Nixon was compelled to do so – as was Bill Clinton. Trump will resist any such move. Only his fellow Republicans can force him to take that step. The pressure on Republicans to uphold the integrity of the US judicial system will sharply intensify. If one Republican senator, such as John McCain, breaks ranks, others would follow. So far the partisan line is holding. But it is under acute stress.

The second is that Trump will now find it impossible to banish the Russia narrative. In politics, bandwidth is power. It will be hard for Trump to achieve much else while the Russia shadow hangs over him. It is difficult to believe he would have taken such a step had he believed leaving Comey in place would pose a lesser risk. Having been blamed widely for tipping the election to Trump, Comey was on a quest to salvage his reputation. Now that he is gone, others in the FBI may take the initiative. It is worth remembering that Nixon was undone by a disgruntled FBI official, Mark Felt, who leaked details about his Watergate cover-up to the Washington Post. Either way, talk of the Trump administration’s “normalisation” looks premature. We are entering Nixonian territory.

The third consequence is how this will go down in Moscow. The Russian government has made little secret of its desire to contaminate US democracy. On Tuesday, Vladimir Putin chalked up another victory. The US president did something typically associated with a non-democracy. He interfered with the course of justice. Not even Nixon fired the head of the FBI. Russia may not achieve a grand bargain with the US to create its own sphere of influence. Trump would find it hard to make any kind of geopolitical concession without provoking Republican hawks, such as McCain. But Russia has already won the prize it sought. American democracy is in a deepening crisis. When and where it will end is anybody’s guess.