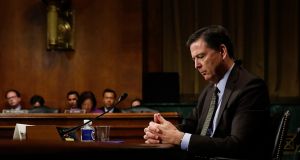 US President Donald Trump has defended his firing of the FBI’s director and vowed to replace James Comey with someone “far better.”

“Comey lost the confidence of almost everyone in Washington, Republican and Democrat alike. When things calm down, they will be thanking me,” Mr Trump wrote in a series of posts on Twitter one day after he fired the top US law enforcement official.

Comey had been leading an investigation into the Trump 2016 presidential campaign’s possible collusion with Russia to influence the election outcome.

Mr Comey’s firing came days after he testified on Capitol Hill about the FBI’s investigation into Russia’s election-meddling and possible connections between Russia and Mr Trump’s campaign.

In a letter to Mr Comey, Mr Trump said the spy chief was “not able to effectively lead the bureau.

“It is essential that we find new leadership for the FBI that restores public trust and confidence in its vital law-enforcement mission.” It is understood that Mr Comey was dismissed over issues going back to July 2016. This is the period when Mr Comey announced an investigation into then Democratic presidential candidate Hillary Clinton’s email server, an intervention Mrs Clinton claims swayed the election in her rival’s favour.

Mr Trump’s political opponents were quick to compare the president’s actions to those of one of his predecessors, Richard Nixon, during the Watergate affair that eventually toppled him.

In an early-morning tweet on Wednesday, Mr Trump added that Mr Comey “will be replaced by someone who will do a far better job, bringing back the spirit and prestige of the FBI”.

He also attacked Democrats who were critical of his firing of Mr Comey.

Mr Trump said that Democrats “have said some of the worst things about James Comey, including the fact that he should be fired, but now they play so sad!”.

Watching Senator Richard Blumenthal speak of Comey is a joke. "Richie" devised one of the greatest military frauds in U.S. history. For....

years, as a pol in Connecticut, Blumenthal would talk of his great bravery and conquests in Vietnam - except he was never there. When....

caught, he cried like a baby and begged for forgiveness...and now he is judge & jury. He should be the one who is investigated for his acts.

This is Nixonian. Deputy AG Rod Rosenstein must immediately appoint a special prosecutor to continue the Trump/Russia investigation.

Comey lost the confidence of almost everyone in Washington, Republican and Democrat alike. When things calm down, they will be thanking me!

The president said that Republicans and Democrats will soon “be thanking me” for firing Mr Comey. He tweeted that Mr Comey had “lost the confidence of almost everyone in Washington, Republican and Democrat alike”, adding that “when things calm down, they will be thanking me!”,

Mr Comey has come under intense scrutiny in recent months for his public comments on an investigation into Democrat Hillary Clinton’s email practices, including a pair of letters he sent to Congress on the matter in the closing days of last year’s campaign. Mr Trump made no mention of Mr Comey’s role in the Clinton investigation, which she has blamed in part for the election result.

But in announcing the firing, the White House circulated a scathing memo, written by Deputy Attorney General Rod Rosenstein, criticising Mr Comey’s handling of the Clinton probe, including the director’s decision to hold a news conference announcing its findings and releasing “derogatory information” about Mrs Clinton.

Since Attorney General Jeff Sessions recused himself from the bureau’s Trump-Russia probe, Mr Rosenstein has been in charge.

This is only the second firing of an FBI director in history with president Bill Clinton dismissing William Sessions amid allegations of ethical lapses in 1993.

Mr Comey was speaking to agents at the FBI’s field office in Los Angeles when the news of his firing flashed on TV screens, according to a law enforcement official who was there. Mr Comey initially chuckled, then finished his speech, said the official, before he left on a plane to return to Washington.

The Democrats expressed deep scepticism about the stated reasons for Tuesday’s firing, raising the prospect of a White House effort to frustrate the investigations by the FBI and congressional panels.

“This is Nixonian,” Senator Bob Casey declared on Twitter.

Republican Senator John McCain of Arizona said Congress must form a special committee to investigate Russia’s interference in the election.

Mr Trump will now appoint Mr Comey’s successor while his deputy, Andrew McCabe, takes over in the interim.

Mr Trump has ridiculed the investigations as a “hoax” and has denied his campaign was involved in Russia’s meddling. In his letter to Mr Comey, he asserted that the FBI director had informed him “on three separate occasions that I am not under investigation”.

Tuesday’s stunning announcement came shortly after the FBI corrected aspects of Mr Comey’s sworn testimony on Capitol Hill last week. Mr Comey told politicians Huma Abedin, a top aide to Hillary Clinton, had sent “hundreds and thousands” of emails to her husband’s laptop, including some with classified information. On Tuesday, the FBI told the Senate Judiciary Committee only “a small number” of the thousands of emails found on the laptop had been forwarded there while most had simply been backed up from electronic devices.

Some politicians did welcome news of the dismissal.

“Given the recent controversies surrounding the director, I believe a fresh start will serve the FBI and the nation well,” said Republican Lindsay Graham of South Carolina, chairman of a Senate Judiciary subcommittee investigating the Russian campaign interference.

Mr Comey (56) was nominated by President Barack Obama for the FBI post in 2013 to a 10-year term, though that appointment does not ensure a director will serve the full term. His prominent role in the 2016 presidential campaign raised questions about his judgment and impartiality.

Though the FBI did not recommend charges against Mrs Clinton for mishandling classified information, Mr Comey was blisteringly critical of her decision to use a personal email account and private internet server during her four years as secretary of state.

He said he was “mildly nauseous” at the thought of having swayed the election but also said he would do the same again.

Mrs Clinton has partially blamed her loss on Mr Comey’s disclosure to Congress less than two weeks before Election Day that the email investigation would be revisited.