America Letter: No sign of caution as president seeks retribution and legal intervention 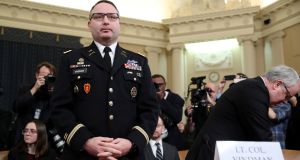 Lieut Col Alexander Vindman: The decorated veteran who testified at the impeachment inquiry was escorted from the White House. Photograph: Jonathan Ernst

As senators weighed whether to convict US president Donald Trump during his impeachment trial earlier this month, one recurring question presented itself. Would an acquittal unleash Trump and sanction even more questionable behaviour from the president?

Or – as Republican senator Susan Collins suggested as she justified her decision to exonerate the president – had he learned his lesson from the impeachment process, and would he, as she predicted, be “much more cautious in the future”?

This week, the senators got their answer.

In the week-and-a-half since Trump was acquitted by the Senate on charges relating to his dealings with Ukraine, the United States has got a taste of what a president unbound looks like.

His response to the trial’s conclusion began with an hour-long televised monologue in the White House the following day – “not a news conference . . . not a speech . . . but a celebration” – as he put it, during which he claimed that he “did nothing wrong”. As his attention moved around the room, name-checking guests – “This guy is great” he said pointing to a smiling Senate majority leader Mitch McConnell – the assembled crowd nodded and clapped in delight.

Within a further 24 hours he sought retribution. Lieut Col Alexander Vindman – a decorated veteran who had testified during the impeachment inquiry – was escorted off White House premises, after the president had shared a number of tweets calling for his removal.

His twin brother, who also worked at the National Security Council, was dismissed too. The US’s man in Brussels, Gordon Sondland, was next. The ambassador, who related his concerns about the Trump administration’s policy towards Ukraine and the role of Trump’s personal lawyer, Rudy Giuliani, to the impeachment inquiry, was recalled.

The series of removals – and the departure of career diplomats and impeachment witnesses Marie Yovanovitch and Bill Taylor in the preceding days – prompted comparisons with Richard Nixon’s famous Saturday Night Massacre when the president fired several disloyal officials.

But it was this week’s intervention by the president in the case of Roger Stone that has underscored fears that he is exceeding executive power and seeking to undermine the independence of the legal system.

Stone, who was charged just over a year ago with obstructing congress over the Mueller investigation into Russian interference in the 2016 election, as well as campaign finance crimes, was due to be sentenced this month. A long-time friend of Trump’s, he was centrally involved in the president’s election campaign four years ago.

Shortly before 2am in Washington on Tuesday, Trump used his favourite form of communication – Twitter – to rail against the “horrible and unfair” sentence facing Stone, after prosecutors had recommended seven to nine years in prison. “Cannot allow this miscarriage of justice!” he tweeted.

Later that day, it emerged that the justice department was changing its original request and asking for a more lenient sentence. Officials insisted that the decision to do so had already been made on Monday evening, before Trump’s tweet, and the president told reporters on Tuesday that he had not asked the justice department to intervene. But later that day four federal prosecutors lodged papers with the court withdrawing from the case.

Trump continued his Twitter attacks, suggesting that one of the jurors was biased, and targeting Judge Amy Berman Jackson, who was also involved in the case of Paul Manafort, his former campaign manager. “Is this the Judge that put Paul Manafort in SOLITARY CONFINEMENT, something that not even mobster Al Capone had to endure?” he wrote. “How did she treat Crooked Hillary Clinton? Just asking!”

In fact Berman had no authority over the conditions in which Manafort was confined.

The controversy then took an unexpected twist when attorney general Bill Barr – the top justice department official – gave an interview on Thursday night to ABC News, claiming that the president’s interventions were making it “impossible for me to do my job”.

“It’s time to stop the tweeting about department of justice criminal cases,” he said, warning he was “not going to be bullied or influenced by anybody”. The surprise intervention initially prompted a relaxed response from the White House, with press secretary Stephanie Grisham saying the president “wasn’t bothered by the comments at all”.

By Friday morning, the president was again on Twitter stating he had “the legal right” to intervene in a criminal case.

Tensions between the White House and the department of justice have been a running theme of the Trump presidency, ever since the department opened the Russia investigation under former attorney general Jeff Sessions. Whether this latest controversy will serve as a check on Trump’s behaviour or lead to his continuing defiance of the norms of presidential behaviour and the possible removal of Barr remains to be seen.